VerticalResponse
Posted by BlogAdmin at 11:27 PM No comments:

CONTEXT
Natural Casamance is a separate region of southern Senegal separated from the rest of the country by Gambia. It is a region barely left standing after years of violence around the separatist rebels of the Movement of Democratic Forces of Casamance (MFDC).

The region has the same name as its main river land that opens multiple characteristics: fertile soils, farming and fishing as well as tourism that develops around the coast. This coastline is in fact a huge delta. North of the delta, a wide dune strip protects the hinterland, villages, mangroves and rice fields. 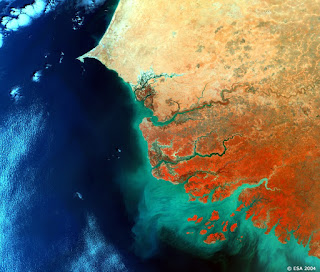 This is the dune belt that two companies covet ( the Australian and Chinese Astron Carnegie, one of the largest zircon buyers in the world) to extract zirconium mineral massively for worldwide consumption, the nuclear industry and paints and abrasive papers.

ISSUE
An exploration permit has been issued by the Government of Senegal in 2004 setting in motion a classic theme "employment against environment". And since 2007, hundreds of small exploratory drilling took place in "Dune". On 1 August 2014, the State of Senegal issued a decree allowing Carnegie/Astron to move into the exploitation phase.

Locals in the area are concerned by this operation between Niafarang, Diouloulou, Kabadio and Abéné opposes this devastating mining project against their precious ecosystem. Here are their arguments

SITUATION OF CONFRONTATION
The "Environmental and Social Impact Study" published in 2010 minimizes the degree of opposition from the local population and concludes with a long list of "mitigation measures".  Even the decree of the State of August 1, 2014 on the farm speaks of "huge difficulties linked to low social acceptance of the project in the middle of implementation."

Public meetings against the project, petitions for village chiefs, releases of refusal of MDFC, musicians concerts are just a few of many activities carried out against the project. In the region, the conflict between the two interests is severe enough that the army has begun to increase its patrols on site. Intimidation and corruption have also appeared in this issue  clashes between "pro - and anti - zircon" seem inevitable if Carnegie continues its exploitation of the Niafarang dunes.

"We safeguard and restore wetlands for people and nature"
Posted by BlogAdmin at 9:21 PM No comments:

Rubbish Awareness in the Mangroves 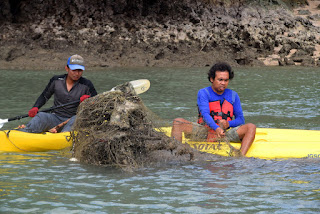 Today Hawai’i’s sea turtles are so plentiful they are almost a pest, especially for surfers.  The North Shore’s Laniakea Beach turtle colony creates traffic jams, with docents guarding the turtles from human contact.  Such is the positive result of a clean marine environment.

Long before my Amakua came along, my Sierra Club family was onto the rubbish problem – in the 50’s we boated to Catalina for the week-end, picked up rubbish from shipping along the way,  At Catalina’s isthumus chances were we were the only boat in the Bay,

Hawai’i is my “A’ina” (homeland) but Asia, not Hawai’i, is where we win or lose the Planet.
I researched South-East Asia and decided Thailand was my most promising choice. I knew I was accepting an uphill battle, but I didn’t know I was climbing Mount Everest.

I miss Hawai’i with every heartbeat, but we are laying the groundwork for an Eco-Asia –
and Asia is where we win or lose the Planet

Leaving Hawai’i was my life’s most difficult decision –I take it philosophically.  Hawai’i has little marine rubbish, and for 26 years I’ve contributed to protecting  the Andaman Sea’s spectacular treasures. 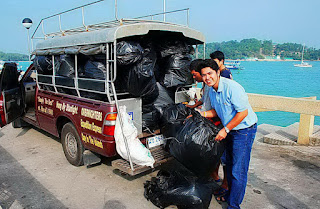 I go on my trips 3-4 days a week. The staff are so professional I disappear to stalk rubbish in my favorite coves and crevasses.  Wearing dive booties and gloves, my paddle reaching into crevasses to encourage Styrofoam, plastic bottles, plastic bags, toys and used tampons into the kayak, I often pull three bags of rubbish from Phang Nga Bay in just one day.

My fingers are arthritic after 26 years zig-zaging to collect rubbish.  Not so bad in a Sit-On-Top but a big strain in inflatables with two guests.  I did the inflatable edition for 20 years and give Big Thanks to SOTAR for the first 9,000 black bags.  With my arthritic thumbs, I now paddle a quick and maneuverable Ocean Kayaks Tetra Single with a back well that takes at least a half bag before returning to our mother ship.

Sometimes the job is so big teamwork prevails.  This recently came to the fore when I discovered a sunken tree that fell from a cliff around the point from the Park ranger station.  Covered with “ghost: fish nets propelled by the current, the tree was a natural death trap for any marine animal.  I selected  the lowest tides and took my “Dirty Work” team to literally break the Gorgonian knot.
We started at high tide, cleaning 12 bags of rubbish from the jungle behind the beach.

As the tide dropped the barnacle carpeted tree became bare, and so were our hands – gloves or not.  Wind and current obviously brought trash to this point, so we left the tree to catch more rubbish, inviting clean-ups for years to come.  Perhaps one day the Park Rangers will join the fray – Dream on!

Thailand’s beaches are often backed by mangroves.  Removing the rubbish from roots and trunks is difficult.  I used to crawl on my hand and knees, but with a degenerated knee (companion to my degenerated mind) I find it much easier to just to crawl on my belly through the red ants, passing the plastic and Styrofoam to an assistant behind me.  The ants are a hassle but it’s an efficient slog through deep mangroves.

I spray my entire body with insect repellant –– and still wear swimming trunks.   The bug juice doesn’t completely stop the ants.  When ants get into long pants it’s a bitch getting them out when knee-deep in mud and mangrove roots. 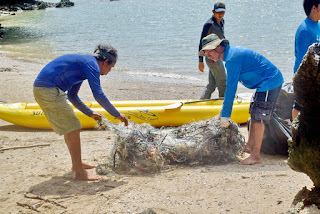 To maximize your extraction effort, join with a school or service club – more hands to the rescue.  We’ve done great work with the International Business Association of Phuket – working with a village on remote Koh Yao Yai taking about 50 bags of rubbish off their rocky point in just one day – while teaching the children the evils of Marine Rubbish.

Every year the British International School finances a clean-up with their high schoolers.  We survey in advance, looking for heavily polluted sand beaches backed by mangroves.  This year’s effort was adjacent to a huge Five Star resort.  The resort created the rubbish but ignored our offer of cooperation – although our clean-up was literally next to their beach.  It was strange crawling on my belly through mangrove roots carpeted with Styrofoam and red ant colonies - retrieving, water bottles, wine bottles and plastic utensils from the resort while a cautious hotel staff stood by making sure these crazy Farang didn’t sneak into the hotel.

In this scenario efficient teamwork wins. One rubbish zealot crawls on their stomach through the roots, tossing as much rubbish as possible back while the “sweeper” bags the rubbish. 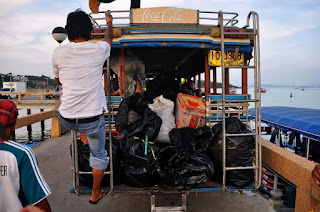 On the downside, few if any competitors collect marine rubbish – they just contribute to the problem. Some even label their plastic water bottles so we know who tossed what into the sea.

Thailand’s Marine National Parks Department does nothing – except collecting the B400 person entry fee (about $12/person).  Phang Nga’s Deputy
Director did show once – in his well-pressed Uniform - for a University clean-up to flirt with the students.

Phang Nga Bay is downwind and downstream from the famous James Bond Island tourist trap, where venders sell carved seashells while hosting horrified baby gibbons on their shoulders.  When the vendors make a sale, they often pull out extra plastic bags that swirl into the wind – eventually drifting down to the sea caves.

Village fishermen often take families in the longtails, throwing plastic and tampons overboard (retrieving used Tampons is great fun!):  National Parks does nothing to educate villagers of the evils of marine rubbish – which decorates the mangroves adjanent to the villages.

We are successful with local private school clean-ups, particularly British International School-Phuket, whose commitment includes paying for their annual student clean-up.  I taught “Coastal Tourism Management” at Prince of Songkla University and we did many clean-ups, some with local TV coverage.  I took off a semester to make a documentary and the Professor who stole my class has never done one. 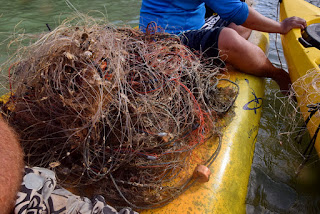 It’s a tough slog – one that will not end in our lifetime.  On every Hong by Starlight trip I know I can count on one full rubbish bag – Styrofoam, plastic parts, toys, hairbrushes – you name it.  If it floats, it ends up in my kayak.  As I write I’m looking at my latest souvenir – a black rubber bucket encrusted in barnacles and sea shells.
Obviously this commitment wreaks havoc to your golf game (I prefer kayaking) but the numbers speak for themselves - It takes a small Styrofoam cup about 50 years to decompose; 200 years for an aluminum can and 450 years for a plastic bottle.
That’s a great legacy to leave  our offspring. 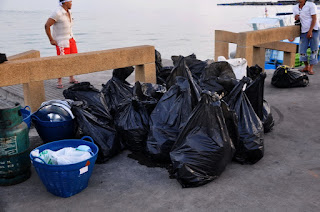 Posted by BlogAdmin at 11:37 AM No comments: