Mangrove Action Project
Posted by BlogAdmin at 10:30 PM No comments:

In March 2019, MAP's co-founder and program director, Alfredo Quarto, was invited by the Minister of Environment of the Maldives, Dr. Hassan to visit the Maldives. MAP was asked to help advise on whether or not a damaged mangrove area found on the island of Kulhuduffushi could be saved or whether it was best to simply reclaim the remaining area of mangroves that had been adversely affected by recent construction of an airport runway that had been constructed cutting across a once healthy mangrove lagoon. Though most of the mangroves were destroyed by the runway development itself, some remnant areas of mangroves survived, but were affected by loss of normal hydrology because the runway blocked the original access points to the sea and could lead to dangerous flooding conditions during the ensuing monsoons. As well, increased heat and dry conditions led to a large fish die-off in the existing damaged water body due to rapid decrease in oxygen, and this generated calls to fill in the remnant mangrove wetland to prevent foul odors and increased  mosquito breeding grounds. 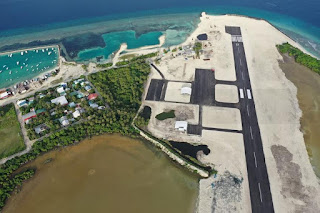 With the official invitation to MAP to visit the Maldives, Alfredo received permission to bring a team of mangrove experts, including MAP's Asia Coordinator and CBEMR lead trainer, Jim Enright, as well as two mangrove scientists from the IUCN sponsored Mangrove Specialist Group, Drs. Joe Lee from Hong Kong and Dan Friese from Singapore. The government sponsored the visiting scientist, while MAP representatives were sponsored by the local NGO network, Save the Maldives, which found local donors to bring Jim and I over. So, a fur person team met in the capitol of Male' on April 19th, then headed next day to Kulhuduffushi to investigate the state of the remaining mangroves where we conducted two days of intensive study and data gathering aimed at making an initial report to the Minister. We were joined by members of the EPA and Ministry of Environment in this assessment endeavor, and our final recommendations and report to the Ministry is still a work in progress.

What we can now say about our assessment is that the remaining mangroves do seem to be still in a good state of health, and this is quite promising. The following information concerning the Maldives might be of interest! 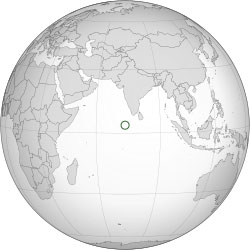 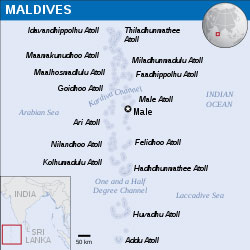 listen); Dhivehi: ދިވެހިރާއްޖެ Dhivehi Raajje), officially the Republic of Maldives, is a country in South Asia, located in the Arabian Sea of the Indian Ocean. It lies southwest of Sri Lanka and India, about 1,000 kilometres (620 mi) from the Asian continent. The chain of 26 atolls stretches from Ihavandhippolhu Atoll in the north to Addu Atoll in the south. Comprising a territory spanning roughly 298 square kilometres (115 sq mi), the Maldives is one of the world's most geographically dispersed sovereign states as well as the smallest Asian country by land area and population, with around 427,756 inhabitants. Malé is the capital and the most populated city, traditionally called the "King's Island" for its central location.
The Maldives archipelago is located on the Chagos-Laccadive Ridge, a vast submarine mountain range in the Indian Ocean, which also forms a terrestrial ecoregion, together with the Chagos Archipelago and Lakshadweep.[12] With an average ground-level elevation of 1.5 metres (4 ft 11 in) above sea level,[13] it is the world's lowest country, with even its highest natural point being the lowest in the world, at 5.1 metres (17 ft).[13] Due to the consequent risks posed by rising sea levels, the government pledged in 2009 to make the Maldives a carbon-neutral country by 2019.[14][needs update]
Posted by BlogAdmin at 10:36 AM 1 comment:

Posted by BlogAdmin at 10:56 PM No comments: