Posted by BlogAdmin at 10:00 AM No comments:

IN DEFENSE OF THE QUILOMBO BOCA DO RIO - Call to Action

We are the TRADITIONAL COMMUNITY OF QUILOMBO BOCA DO RIO, our territory is located in Baia  de Aratu, municipality of Candeias, state of Bahia. We are duly recognized as quilombolas by the Brazilian State,  certified by Fundação Cultural Palmares and with a regularization process in progress at the National Institute of  Colonization and Agrarian Reform (INCRA). Our community has ancestral origins in blacks fleeing sugar mills,  indigenous remnants and blacks who remained in the area after the abolition of slavery. We have a specific territorial  relationship, a common historical trajectory and we recognize our identity in the long process of resistance to the  oppression suffered by our ancestors that lasts until the present times.

Our people have always survived from fishing in the mangroves and beaches of Aratu Bay, where we collect fish,  crustaceans and shellfish, and in the Atlantic Rainforest, where we collect fruits and essential items for our survival  such as firewood, material for handicrafts, guaiamuns, medicinal herbs, among others. We practice small-scale  farming and raise small animals. Our people have ancestral traditions and knowledge passed down from generation  to generation. 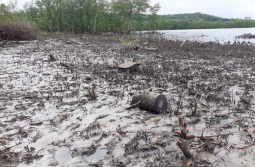 In the 30s and 40s of the last century, the Brazilian Navy began to covet our territory to build a military base, the  Aratu Naval Base, creating conflicts with our ancestors. These confrontations culminated in a settlement between  the Navy and the heirs of the slaveowner Wanderley Pinho, who registered a public deed and officially recognized  our property over a fraction of the territory to facilitate the installation of petrochemical companies in our traditional  territory. Countless companies have settled in our territory, such as the Port of Aratu, Volpak, Braskem, GDK,  Mendes Jr, Ford and Dow Chemicals.

Even so, we continue to use traditional territory in the most diverse ways, whether at sea, mangroves, beaches,  sandbanks and forests. It turns out that the community has come to be affected by serious conflicts and violations, restricting our access, closing traditional paths, devastating our forests and mangroves, increasing the sendimentation  of the sea, rivers, water sources and contaminating the environment and our bodies. 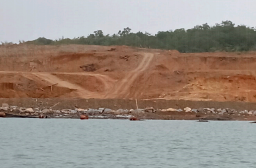 The violence is so intense that Braskem S/A, a company of the Odebrecht Group, is releasing chemical products  onto our community to compel our people to abandon their homes. We are experiencing a real chemical war! Two  ordinances were created with private security that cause constraints on access to our homes. We do not have access  to public education and health policies in the community. There is no public transport and it is necessary to walk  more than 6 km to access it. At all times, we are threatened with power outages, drinking water and dumping.
In addition to this daily scenario of denial of our rights,
CODEBA (a Brazilian public company) is trying to expel us  from our ancestral territory through a lawsuit that is pending in the 4th Federal Civil Court of Bahia. Mind you, those  who invaded our territory accuse us of invaders! Urged on by the community, neither the Federal Prosecutor's Office  nor INCRA, authorities with an institutional role to promote the defense of the community, take any legal action in  our defense. The Federal Public Ministry has even refused to meet to hear from the community and other civil society  organizations about the serious violations that have occurred. Thus, while urgent measures are not being taken by the  authorities, the community is at serious risk of expulsion, even with title deed to part of the duly registered territory.

Intensifying our suffering even more, in September of 2020, we were surprised by the start of construction work on  a private port owned by the company BAHIA TERMINAIS S/A. The construction started with the devastation of  the Atlantic Forest, mangroves, removing of hills, landfill of the sea, destruction of rivers and water sources. It will suppress most of our territory, depriving us of the means to guarantee our existence and subsistence, as well as that  of other quilombola communities and artisanal fishermen who fish and shellfish in the area. Even though there was  a contrary recommendation from the State Public Ombudsman Office, the Government of the Bahia State disregarded  and granted an environmental license for the enterprise in an irregular manner, full of illegalities, without observing  the requirements of the environmental legislation, as well as the rights of the traditional and remaining peoples of  quilombo. The necessary environmental and social studies were not carried out, nor was the publicity required by the  law given to the undertaking.

The land where the project will be installed was provided by the Government of the Bahia State, without considering  the ancestral rights of our community, showing a role as a promoter of private interests, when it should act as a  mediator in order to protect the rights of those historically disadvantaged. At no time was the community heard or  acknowledged. At no time were the rights of traditional and remaining quilombo communities provided for in the  Federal Constitution, the laws and international treaties signed by Brazil, such as ILO Convention 169, respected.

In view of this flagrant illegality, we activated the justice system and on 03/10/2021 a preliminary decision was  issued determining the suspension of environmental licenses and the immediate halt to the devastation carried out by  the company BAHIA TERMINAIS S/A. However, to date, the Government of Bahia has not taken a position about  the court decision neither has not supported, through its agency INEMA, the compliance with the judicial orders. The  same occurs with the Federal government, which can intervene through the government agencies ANTAQ and  IBAMA, and remains equally silent. Thus, BAHIA TERMINAIS S/A continues to destroy the territory extremely  quickly. It is cutting down forests, earthmoving hills, landing mangroves and the sea, desecrating animals from forests  and mangroves and the memory of our ancestors.

When trying to notify the company of the judicial decision, the marshall officer verified that there is no trace of  BAHIA TERMINAIS S/A at the registered address. Everything leads us to believe that this is a ghost company!!! At  the same time, there are strong indications that the company BAHIA TERMINAIS S/A, in fact, is owned by a  powerful contractor known as CARLOS SEABRA SUAREZ, with a strong influence on the political establishment,  the judiciary and the media. For this reason, the case is shielded in the Bahia media and there is no coverage in the  mass media.

In view of the seriousness of the violations that we report here, we call on all organizations to give as much  publicity as possible and, at the same time, to pressure Brazilian authorities to take appropriate measures to  guarantee our rights!

Rapporteur on the Rights of Afro-Descendants and Against Racial Discrimination

Secretary of Justice and Human Rights of Bahia

Secretary of Environment of the State of Bahia

Contacts with the community can be made through the e-mail: qbocadorioaratu@gmail.com

Posted by BlogAdmin at 7:35 PM No comments:

Mangrove Action Project
Posted by BlogAdmin at 10:00 AM No comments: