Posted by BlogAdmin at 9:49 AM No comments:

Antanandahy: Where the Women Rule the Mangroves

After winding its way west, Madagascar’s Tsiribihina River splits into a maze of tributaries entwined
in mangroves, finally emptying into the Mozambique Channel. At the end of last year, Sylvia
and Kate of the Blue Forests team made their way north to the Tsiribihina Delta, meeting with
WWF Madagascar, local partners, and communities who have all worked together on mangrove
conservation there since 2011. Our goal was to initiate a relationship with these communities and
start a feasibility study for blue carbon in Tsiribihina - and what a place to do it! The locals of the
Tsiribihina Delta truly live a mangrove lifestyle – from fish and wood to storm protection – the
people here are linked with the mangrove forest at every turn.

While still teaming with life, the degradation and outright deforestation of the mangroves of the
Tsiribihina Delta is obvious to local people, and they are acting to stop it. Communities here have
formed forest policing groups and have even reforested former mangrove areas. While we were
so impressed (it is impossible not to sing their praises) that’s not what this blog is about. What we
want to tell you about is a tiny village, tucked away in the mangroves of the Tsirbihina Delta, and the
women living there.

Antanandahy (An-tan-an-die) is a modest village of about 400 people perched on a stretch of sand,
up one of many north-south tributaries of the Tsiribihina Delta. Accessible only by boat, the tiny
village bobs on the horizon until you pull up to its sandy white bank. Despite being outsiders, and
one of us a foreigner to boot, the people of Antanandahy were very friendly and easily plopped
down in the sand under a makeshift palm shelter to tell us about their lives, and the mangroves on
which they depend.


While the villagers were all smiles, life in Antanandahy is tough. A glimpse shows you that the
community has only the sea, the mangroves and the river channel to survive; there is no clean
water, no market, and no access to health care. There are few income opportunities here and there
are no signs of modern life, apart from a few people with mobile phones. Like many other villages
in the Tsiribihina Delta, bandits attack regularly, robbing the locals of their hard-earned cash from
selling fish and stealing whatever possessions they have in their homes.

During the three days we spent in Antanadahy, we observed a few training sessions with the local
fishers association, Lalanda, and the Ministry of Elevage (Ministry of Livestock), which had been
organized by WWF at the request of the villagers. Training included techniques for improving
methods for salting fish and keeping ducks. These activities are expected to lessen the pressure on
natural resources by supplementing household incomes. The highlight came when we realised that
although the salted fish training was intended for men, the audience ended up being mostly women.
While salting fish is traditionally a man’s job, the women of Antanandahy are actually in charge of
making the salted fish in many families.

When not busy harvesting mangrove resources, salting fish, caring for children, weaving palm
baskets, or cropping cassava and potatoes, these women are looking out for the mangrove forest.

When we raised the topic of mangrove conservation, we saw a special light come into the women’s
eyes. They spoke enthusiastically of the measures they take to protect the forest: they voluntarily
collect mangrove propagules, pick areas to be reforested, and journey through the delta in pirogues
to plant new mangrove trees. Not only are women replanting mangroves, but they play a vocal role
as mangrove custodians, inciting the men of the village to replace the mangrove they cut by planting
new ones. During group discussions, we were amused and pleased to see women calling out the
men who weren’t entirely honest about the ways they used the mangrove forest. 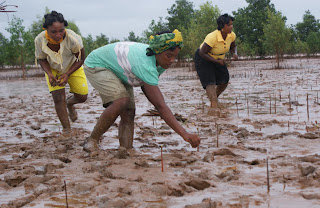 Women of Antanandahy showing how to plant mangroves (S Paulot) 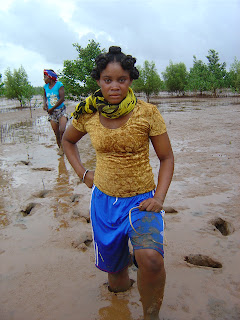 A woman from Antanandahy in the mangroves. (S Paulot)

Striving to create their own future and better livelihoods, the women of Antanandahy tried to
form a women’s association, aimed at cooperative vegetable farming and duck rearing. However, a
disagreement about task-sharing brought an end to the project. When we asked how this happened,
one woman frankly answered that they need more training on running an association in order to
make it work. Few women here can read or write since the only school in the village was built just
a few years ago. The women recognized that this was a barrier to their empowerment and wanted
to do something about it. Unsurprised by their candour, we thought, while fish-salting and duck-
farming were important, these women also need training in governance, which would allow them
to play a critical role in the management of their local resources, which they know and use so
intimately. We felt safe concluding that if the women of other villages in the Tsiribihina Delta were
anything like here, that they would be a great credit to a mangrove carbon project. As we look to a
year ahead of project development in the Tsiribihina Delta, we can see that a little capacity building
will go a long way for a group of women with so much wit, assertiveness and heart.

Urgent Action Alert: Please copy and paste the following fetter to send to the ministers in Bimini Island asking them to
"Save Bimini Island from Destructive Development:"


To the Hon. Kenred Dorsett (Minister of the Environment),
The Hon. Obie Wilchcombe (Minister of Tourism, and Member of Parliament for Bimini),
and The Hon. V. Alfred Gray (Minister of Agriculture and Marine Resources,

Dear Sirs,
Like all of the Bahamas, the islands of Bimini are intrinsically defined by the water that surrounds them. Not only has the water shaped and molded the islands themselves, but it has also defined the experience of those that visit these islands, as well as those that call the Bahamas their home. For everyone that loves little Bimini, their affection for its stunning blue water is at the base of their affinity for these precious 'Islands in the Stream.'
Bimini's impressive tourism industry has always revolved around the water. Big game fishing, SCUBA diving, boating, sailing, bone fishing, snorkeling, kayaking, and a variety of wildlife encounters all contribute to the island's flourishing eco-tourism industry.
In order to preserve this industry, and improve upon it going forward, I call on you to act strongly and swiftly regarding two important proposals.
First, I urge you to finalize the full protections for the North Bimini Marine Reserve. Bimini's inshore ecosystems are the foundation for the entire Tourism Industry on the island, and every individual and business will benefit from this Reserve being formally protected.
Second, I plead with you to ensure that the absurdly ill-conceived idea of creating a cruise ship terminal on Bimini's western shore never becomes a reality. The damage that this would have on Bimini's coral reefs would be catastrophic, and that would only be the beginning. The dredging and damage required for such a project could permanently deteriorate the very thing that everyone loves most about Bimini, the amazing blue waters.
Bimini's tourism industry has been growing in recent years, while other islands in the Bahamas have not had the same good fortune. Please keep in mind that everyone who has ever come to Bimini came for what the island already offers; Extraordinarily blue water, exotic wildlife, beautiful beaches, thriving fisheries, vibrant coral reefs, friendly locals, and an escape for the generic, over-developed landscape found elsewhere in the region.
Protecting and improving upon Bimini's ecological health and beauty is truly in the best interests of the island's economy, its people, and all those who cherish their time there.
Please help us ensure a bright, blue future for Bimini.
Respectfully yours,

(YOUR NAME AND CONTACT INFO - NO ANONYMOUS LETTERS PLEASE )
Posted by BlogAdmin at 8:19 AM No comments:

Posted by BlogAdmin at 9:55 AM No comments: