Posted by BlogAdmin at 11:08 AM No comments: 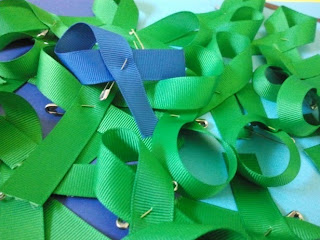 The Blue Green Hand Society (BGHS) is a college-based club that started out in the year 2011. Our main goal revolves around environmental and community service. We began with a total of six members and all were the officers. After recruiting a handful of members, we began planning out volunteer activities. We searched for causes that we were most passionate about. Before we knew it, we went from planning campus cleanups to having an entire week devoted to the Mangrove Action Project (MAP).
BGHS hosted MAP week during Earth Week this year and raised a hundred and forty dollars for the project. Most students did not even know what mangroves were but after a brief introduction, students were coming back with comments such as, “I asked the people at the restaurant if my shrimp was imported. I told them that I was concerned about the mangroves.” 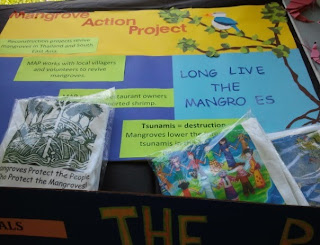 After a week of fundraising and raising awareness, students and professors felt more informed about the current status and the of mangroves. These were some of the thoughts compiled from students after learning about why we need to save the mangroves:

Simranjit Grewal: “Serving as a voice for the MAP was life changing. It opened my eyes to how little we know about the world and changes we need to make as a human species.”
Leticia Sanchez: “As human beings we must understand the value of nature and our impact in the world; it can be positive or it can be negative. Promoting the well-being of mangroves has definitely made a positive impact. I hope our fellow peers, colleagues, neighbors and our communities are able to make responsible choices.”

Christine Nguyen: “There are times where I wonder when it will be enough; is it possible that by spreading awareness we will make a difference? The truth is, it does. One voice can make all the difference and I'm glad we were one of the voices.”

Manpreet Bassi: “I was very surprised how the shrimp population is in danger due to the elimination of the mangrove trees. This is another sign that reminds us to respect and care for other species on earth. We, as humans, care only about us. We want our food to be delicious no matter how much it is hurting our environment. This is just another story that reflects our selfish behavior. We need to change that by restoring the mangroves.”

Raina Hallera: “MAP's initiative to conserve mangroves reduces the farming of shrimp in the process. As an admirer of nature, being able to protect two species at once by bringing the issues to light is a victory.”

Darryl Lopez: “I'm glad that Blue Green Hand Society is working together with MAP to inform the general public about environmental problems such as mangrove loss and shoreline erosion.  It feels great promoting environmental awareness during MAP week.”

Eshani Nandita: “I grew up in Fiji where mangroves are really prominent. I remember learning about its uses and how it keeps the entire ecosystem healthy. Upon discovering MAP, it brought back all the thoughts and feelings I had towards mangroves. Now, I feel much more informed and much more passionate about the lives of mangroves!”

Harpreet Kaur: “I do not feel optimistic about earth if we continue heading on this same path. By cutting mangrove trees, we are abusing nature and its resources. We do not have to be environmentalists to give love and respect to the nature it truly deserves. We are all equally responsible for earth. We all have had our moments in the mountains, in the quiet forest, or on the seashore, when we were stunned by the beauty of nature. We need to preserve that beauty and take responsibility of our actions.”

Likewise, MAP week touched the hearts of many! BGHS will continue working with MAP for the 2013-2014 year. We will continue educating CSU Stanislaus about the dangers of over shrimping and clearing mangroves.
Posted by BlogAdmin at 10:43 AM No comments:

Posted by BlogAdmin at 12:26 PM No comments: