VerticalResponse
Posted by BlogAdmin at 9:41 PM No comments:

Among others, Typhoon Yolanda in 2013 and the 2004 Indian Ocean tsunami have highlighted the importance of mangroves in coastal protection. Of global storm events, the Philippines has the greatest intensity (maximum score of 5 on the Saifir-Simpson Hurricane Intensity Scale) and number (one-third). Mangroves have therefore captured the public imagination – student, NGO, government, religious and business groups plant mangroves themselves or raise money for others to plant. Even the national government planned to allocate PhP1 billion for mangrove rehabilitation in Yolanda sites. Such massive amounts of taxpayers’ and private funds beg the question: Are the planting protocols science-based?

Mangroves are uniquely adapted to withstand harsh conditions of salty water and tidal inundation – but not more than 30% of the time. Hence mangroves are not uniformly distributed between high and low tide, but are found in the middle to upper intertidal levels (at or above mean sea level) where they remain mostly exposed.

So most bakhaw planted along the seafront are the WRONG SPECIES IN THE WRONG SITES, as the scientific community has pointed out since the 1990s. Yet large Rhizophora propagules (or Tusok d Tongki, Cebuano for “sticking the propagules”) are favored over piapi/pagatpat whose small seeds require a nursery phase – Planting by Convenience, not by Ecology. This misguided preference for bakhaw is seen in logos, posters and t-shirts that prominently feature iconic bakhaw prop roots instead of pencil-/cone-shaped pneumatophores (arising from lateral roots) of piapi/pagatpat.

Worse, the practice of seagrass planting continues to this day. In 2003, the Philippine Association of Marine Science called on the Department of Environment and Natural Resources to stop planting on seagrasses, a call repeated and disseminated to DENR field staff in 2005 and 2007. Yet 10 years later, seagrass beds in Cordova, Cebu were again planted to bakhaw (Fig. 3) financed by Oil Spill funds. According to National Scientist Edgardo Gomez, (some) foresters argue that If grasses can be planted to forests, likewise seagrasses can become mangroves, a well-meaning but unscientific transformation. Current mangrove programs also prefer to reforest the ecologically difficult but low- to no-conflict, open access seafront. It should prioritize the biophysically easier but sociopolitically challenging reversion of abandoned ponds, where mangroves used to thrive.

A more worrisome practice has emerged – the Tongki Protocols, by which money is siphoned off reforestation budgets by unscrupulous parties. To switch from easy-to-source and easy-to-plant bakhaw to nursery-reared piapi/pagatpat will affect the modus operandi (and flow of money). Moreover, many mangrove programs are driven by Guinness and/or photo ops. In 2012, around 7,000 volunteers planted one million mangrove propagules in El Verde, Camarines Sur, targetting the Guinness Book of Records. Another million mangrove planting event in Quezon province was named 2014 Galing Pook awardee. Nothing wrong with planting in the morning, posting Facebook photos in the evening, and print/TV media coverage the next day so long as planting is science-based. Unfortunately, the focus on initial planting forgets the endproduct – the mature forest. Like graduation ceremonies, tree planting is only the commencement, yet media rarely report, if at all, the massive mortalities of failed plantings.

Tracking down mangrove survival rates in Camarines Sur via dozens of text/email exchanges with local officials has been fruitless. Reluctance to share bakhaw monitoring data suggests high mortality rates. Not surprisingly the National Greening Program and other projects define reforestation success as the % of target area or number of seedlings actually planted, rather than survival rates (which remain unreported). Yet mangroves and other trees are living beings whose measures of success are growth and survival.

Moreover, such commonplace mortality has led to the dubious but profitable practice of replacement planting, with payment based on number planted. The more plants that die, the more are replaced and, expectedly, the more money is paid. In contrast, No Pay Planting is promoted by the Zoological Society of London, an Iloilo-based NGO, on the premise that labor contributed by fisherfolk entitles them to mangrove ownership. Instead, the ZSL Community-based Mangrove Rehabilitation Project assists communities in applying for tenure, e.g., the Community-Based Mangrove Forest Management Agreement. As owners and de facto managers, coastal folk are obligated to nurture the mangroves to maturity.

Even when successful, bakhaw plantings on seagrass beds are one ecosystem’s gain and another’s loss. Conversion to mangrove forests will deprive mudflats and seagrass fauna, e.g., danggit (rabbitfish), dugong, crabs and birds of their habitats. At the least, white sand substrates turn dark muddy-sand. Interestingly, Philippine mangrove area increased from only ~140,000 ha in 1987-88 to ~250,000 ha in 2003. How many of over 100,000 hectares of new mangroves are former seagrass beds? The DENR and other agencies must account for such conversions, e.g., in Molacaboc, Negros Occidental and Olango, Cebu.

To all Mangrove Planters/Conservationists: 1) Do not plant bakhaw on seagrass beds and mudflats; 2) Plant pagatpat/piapi in the middle-upper intertidal; and 3) Government agencies should report % surviving mangroves rather than % of target seedlings/area planted.

J.H. Primavera is Chief Mangrove Scientific Advisor of the Zoological Society of London, co-Chair of the IUCN Mangrove Specialist Group, Scientist Emerita of the SEAFDEC Aquaculture Department, and Pew Fellow in Marine Conservation. She will cover mangrove reversion of abandoned ponds in asequel.
Posted by BlogAdmin at 7:25 PM No comments:

VerticalResponse
Posted by BlogAdmin at 12:10 PM No comments:

Letter to RAMSAR regarding Site #1000

I write to you today because I am quite concerned about the fate of Ramsar's number 1,000 site in the Gulf of Fonseca in Honduras. I have just returned from helping implement a training workshop in the San Lorenzo area where we had intended to rehabilitate an abandoned, illicitly sited shrimp farm located within the Ramsar site. It had been abandoned for over a decade, and mangroves had already started to return to the site, so we had hoped to help the natural restoration along via our Community-Based Ecological Mangrove Restoration (CBEMR) approach. 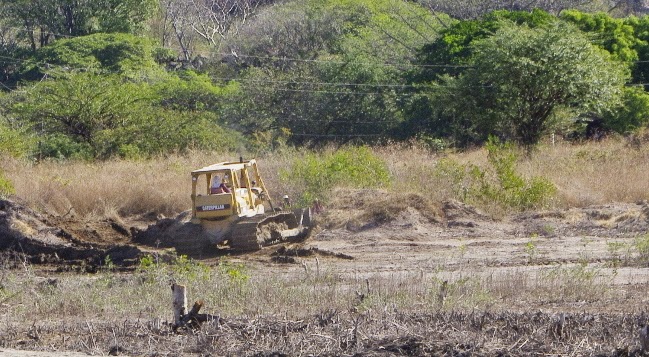 We had given prior notice to the government of Honduras that we wished to use this site in our training workshop, asking for permission to restore an obviously disused shrimp farm, abandoned and non-productive. We listed the site location and mentioned it was part of the Ramsar site. We also gave the dates of our workshop, and thus gave plenty of advance notice of our plans.

When we arrived there at the site to look it over, we were stunned to see the bulldozer at work restoring instead the former two shrimp ponds, removing the mangrove vegetation once again. This was like a cold slap in the face of our stated intentions, but more so, it was a slap in the face of Ramsar by the government of Honduras, once again totally ignoring its stated commitment to the area as a Rasmsar site. 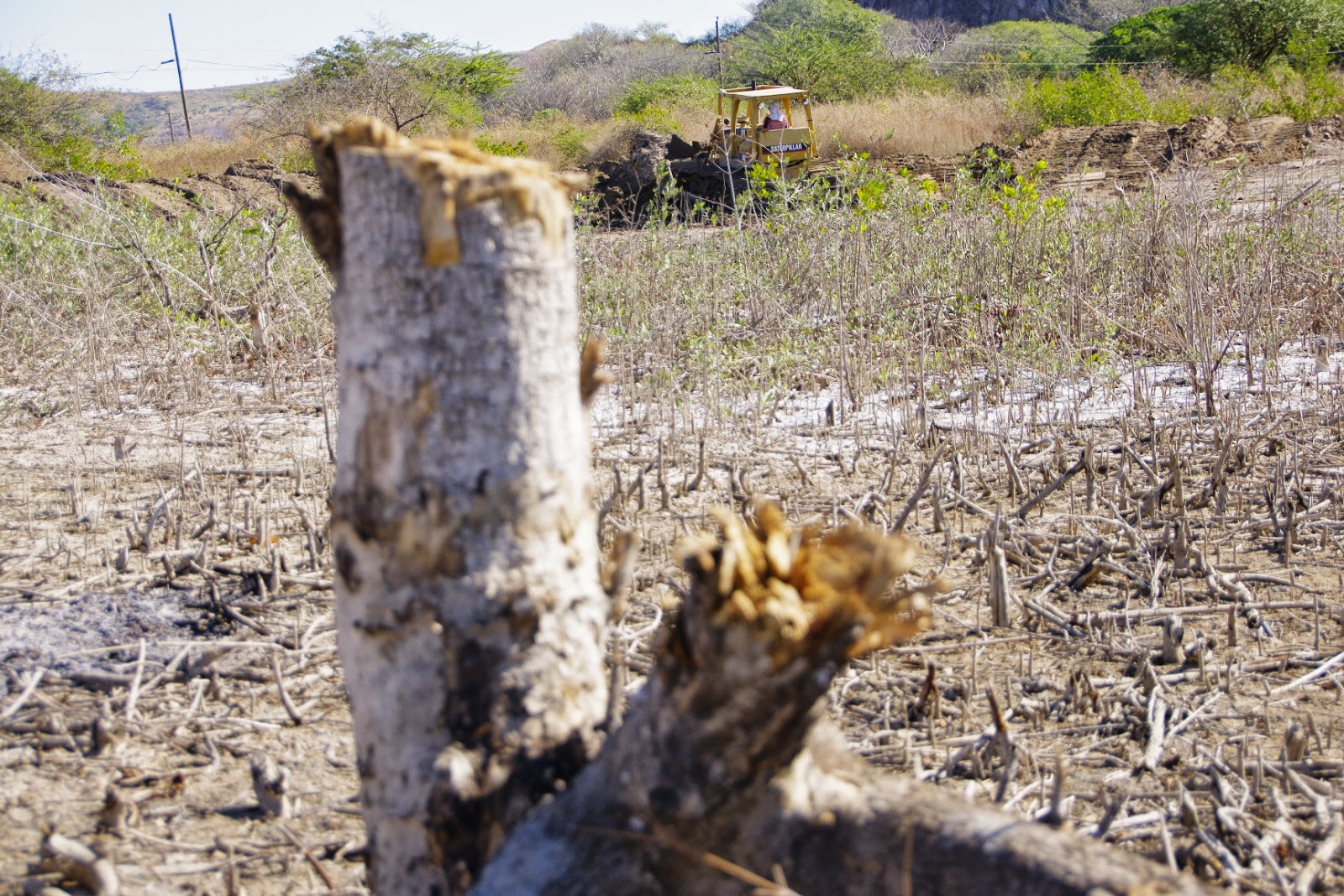 When we questioned the government officials at SERNA and ICF, we were wrongly told that the site had no mangroves present, but we have photos documenting that the site's mangroves were being bulldozed while we visited the site last week. The government's claims are thus refuted by our personal visit and the photos we took while there.
Needless to say, we had to find another site that was suitable to apply the CBEMR method, but luckily our local guides suggested a suitable site on Isle de Pajarros in the Gulf, which we did use to demonstrate mangrove restoration techniques utilizing the CBEMR approach.

What I am asking in this letter is can Ramsar take a more active role in stopping these kinds of open violations against Ramsar designated sites, such as what we witnessed firsthand near San Lorenzo? If not, shouldn't Ramsar de-list such a designated site because it is not in accord with stated Ramsar ConventionÂ  intentions? This de-listing itself would at least show such governments that the Ramsar status must live up to its intended purpose.

Please do let me know if Ramsar will effectively intervene in this case. I attach the letter I wrote to government officials in Honduras and two photos of the site in question that show the current destruction of a segment of mangrove wetland.

Alfredo Quarto,
Mangrove Action Project (MAP)
Posted by BlogAdmin at 10:29 AM No comments: