Mangrove Action Project
Posted by BlogAdmin at 11:02 PM No comments:

Mangrove Action Project
Posted by BlogAdmin at 11:37 PM No comments: 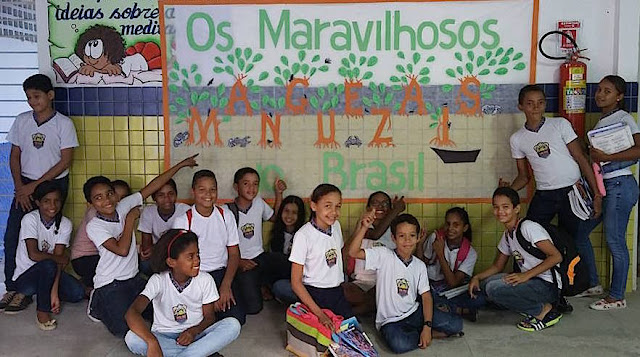 It has been over ten years since work started to translate and adapt Marvellous Mangroves for use in Brazilian schools by MAP’s partners, Instituto BiomaBrasil (IBB). In April, 2006, the process began when IBB’s Clemente Coelho Jnr. and Renato Almeida observed and participated in a MM workshop held in Tilapa on the Northwest coast of Guatemala. Organised in conjunction with the local NGO Amigos Del Bosque and CORALINA - based in San Andres, Colombia, - Tilapa was the launch for teachers of the Guatemala (Spanish) version of MM.

It was only six months later that MAP Education Director Martin Keeley and Elaine Corets (then South American co-ordinator for MAP) rejoined Clemente and Renato together with several teachers and scientists in Cariacica, southeast Brazil, and started work on adapting and translating MM into Portuguese for use in Brazilian schools.

Two years later in summer 2008 the first training in the use of the MM took place and involved 55 teachers from the city of Cariacica, in the Espirito Santo State school system. The workshop was a part of a planned activity between the Projeto Povos e Mangues (Peoples and Mangroves Project) of the Municipal Secretary of Education (SEME) and the Secretary of Environment (SEMMAM). It was run by staff from the Instituto BiomaBrasil – Management and Conservation of Coastal Tropical Wetlands (IBB).

This workshop was shortly followed by a multi-state national workshop in Brasilia. Since that time the numbers of schools, teachers and students who have been exposed to MM in Brazil is impressive. Clemente reports that well over 100 schools, 400 plus teachers and more than 12,000 students in five states have learned the wonders of mangroves through the MM program.

Clemente stresses that MM provides the resources needed to take an in-depth look at mangrove ecosystems. “Both students and teachers are amazed by the ecosystem's beauty and the importance,” he says. “The increasing respect and passion that they develop towards mangroves is noticeable.”

MM, he adds, has proven to be an invaluable tool for supporting teaching methods as a whole, especially in the context of deficient teacher training (25% of all Brazilian teachers have no access to further education). Clemente adds that both the experiments and field activities found in MM are extremely powerful and open the minds of both students and teachers. “The program does, without doubt, change students' atitudes towards mangrove ecosystems,” he says. 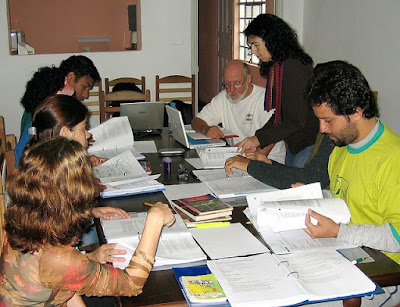 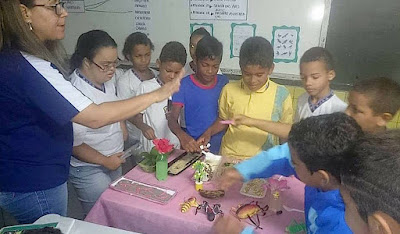 The MM training has led to individuals and communities making concentrated efforts to protect and preserve mangroves where they live and Clemente cites some specific examples:

* Cariacica: Following the teachers’ initial 2-year program, the municipality supported the production of an animated movie involving the schools which had the Marvellous Mangroves experience.

*Maragojipe (BA): Dozens of schools have held demonstrations to draw public attention to the conservation of mangrove ecosystems.

*Cananéia (SP): The experience with MM has led schools to produce and edit a poetry book on the theme of mangroves.

*São Miguel (AL): Classroom activities focussed on mangrove ecosystems plus littering. The teachers used social media to promote their work, calling the community’s attention to this issue. The same teachers organized beach clean-ups in the municipality’s mangroves, as well as taking part in sea-cow releases, accompanied by an IBB monitor.

*São José da Coroa Grande (PE): The MM was introduced by the municipal education authority to all schools where it continues to be taught.

All teachers who have participated in MM are part of a closed group on Facebook - Os Maravilhosos Manguezais do Brasil - where they exchange experiences in different municipalities.

Marvellous Mangroves has enabled IBB to become recognised by the Ministry of Environment as an institution dedicated to the conservation of mangroves and the implementation of extensive educational initiatives involving marine protected areas. Many university students actively support IBB initiatives as a practical part of their studies.

MM has made a long-lasting impact on regional and municipal authorties, says Clemente. For example, the Mayor of Victoria, in his re-election campaign, paid for MM workshops in every school. The the municipalities of Cariacica and Fundão consistently provide ongoing private and public support with teacher participation in the managment of marine protected areas. In another municipality, teachers participate on the management board of the Costa dos Corais protected área in Pernambuco province, as well as organising protection and awareness activities, community-based recycling projects, and continually promoting debates in the social media.

All-in-all MM is here to stay in Brazil’s schools. 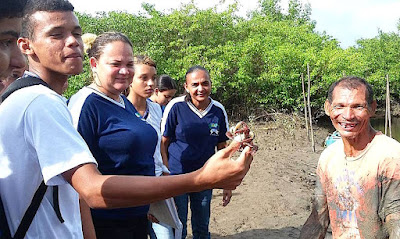 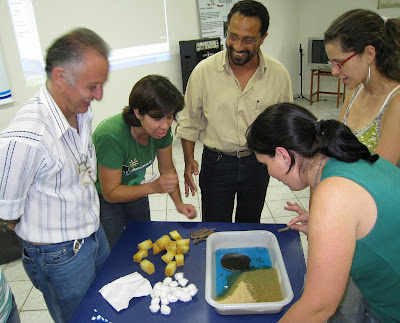 (Left) Teachers field trip: Interview with the fishermen of the Várzea do Una community gathering information about which type of fish is most hunted by local fishermen. (Right) teachers from conducting the oil spill activity from MM during a workshop in Vitoria, Espirito Santo Province. 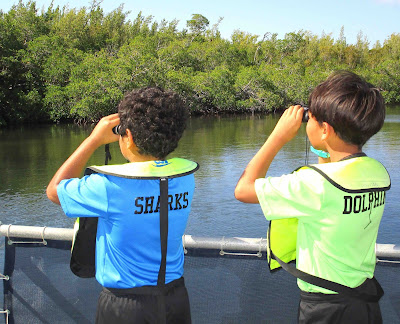 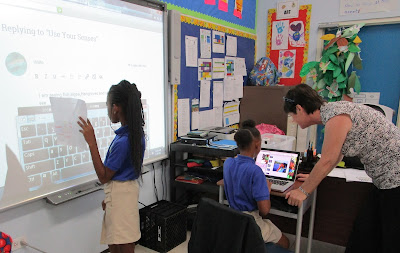 Teachers and students all over the mangrove world are connecting thanks to a new interactive website launched by the Mangrove Action Project (MAP). Marvellousmangroves.org has been several years in the making, says MAP Education Director Martin Keeley, “And we have just spent the last couple of weeks working with Year 5 students at Edna Moyle Primary School, Northside, Grand Cayman, to iron out the bugs and make sure the site is up and running.”

The site is an extension of the Marvellous Mangroves education program which was first introduced into Cayman’s schools in 2001 and has, since then, been taught to every Year 5 at every school class where it is part of the science/social studies curriculum. It is currently being taught by Catherine Childs, Education Director of the Cayman Islands National Trust, and is sponsored by Caribbean Utilities. Since its introduction it has been translated and adapted for use in 13 countries worldwide.

“The primary purpose behind marvellousmangroves.org is to allow teachers and students around the world to explore the wonderful world of mangroves in their own country in their own language,” Keeley, who is also UCCI Cayman Brac Campus Director and founder of the Mangroves & Reefs Education Project, explains. “The site was designed under the supervision of MAP’s IT whiz, Leo Thom, and follows the same five section structure as the Marvellous Mangroves teachers guide.”

“Teachers and students will not only be able to explore mangrove ecology in their own countries - where the site allows teachers to pose questions and students to answer them and record their own findings - it will enable them to find out what their counterparts in other countries are doing and seeing.”

“This Marvellous Mangroves Program is so worth while!” exclaims Ms. Janice Brown, Year 5 teacher at Edna Moyle Primary, whose class enabled the pilot to be undertaken. “It not only teaches students about the values and vital need to protect the mangroves but involves the students learning in an interactive way through the website and through fascinating, outdoor field trips. Education at its best!” 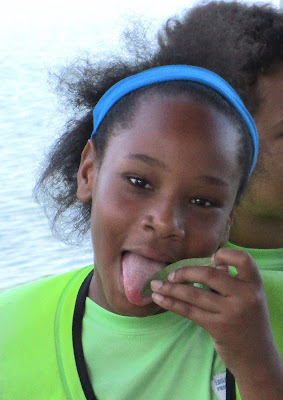 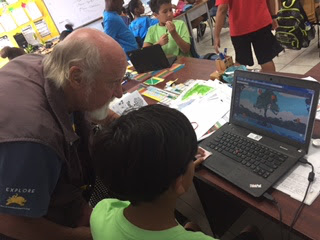 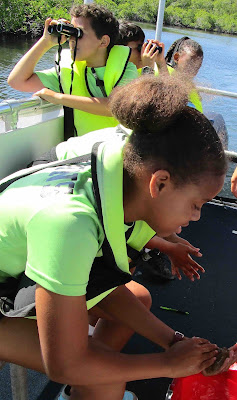 From the field trip to the new website. Students taste testing salt on a black mangrove leaf (left) and checking up on an upside down jellyfish (right) while MAP education director Martin Keeley supervises inputting data on the new MM website. 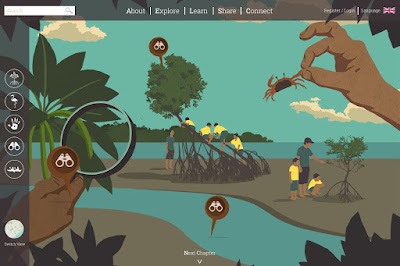 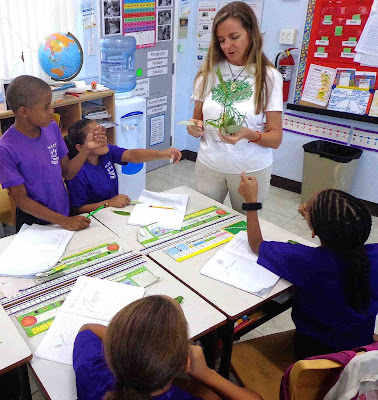 who also posed several skill testing questions on the new site. Classroom activities were followed by a field trip to the Central

Mangroves run by Sea Elements and a final classroom follow-up when students wrote and drew their impressions and entered them on the classroom’s smart board.

“Recording on the website took a little getting used to,” says Ms. Brown, “But once they did, the students were able to transfer their findings from their notebooks to the site. The Marvellous Mangroves programme – whether it’s the actual hands-on exploration or the new website recording - facilitates the use of different learning skills in a way that is very valuable,” she adds.

Using the marvellousmangrove.org site is simple. Students and teachers need to register on-line. Once they have done this and approved by the site moderator, they can then input their observations and findings – not to mention photographs and data of all kinds. These must also be approved by the moderator – another environmental educator, Ms. Marnie Laing, who will then post the information on the site. Ms. Laing was a previous National Trust Education Director who taught the program for several years before Ms. Childs took over, so she is very familiar with the world of mangroves.

“We live in a world where the internet and social media are dominating factors,” says Mr. Keeley. “But what we tend to forget is that many students and teachers in other mangrove countries don’t even have science labs – often not even reliable electricity. Marvellous Mangroves bridges that gap by providing hands-on science activities. We also give many schools studying mangroves light source microscopes and magnifying lenses to help them set up Mangrove Cubs. These, in turn, provide the core for science labs to be established.

“The mangrovellousmangroves.org website will also help to bridge that gap so students can explore and report data using the schools’ computer labs (if they have one) and teachers’ cell phones.” 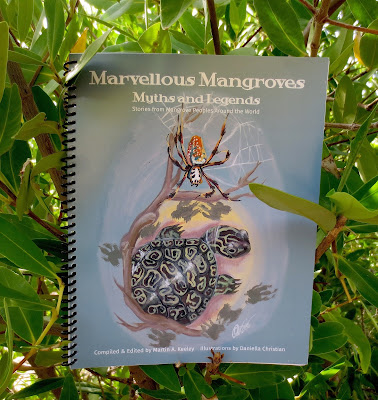 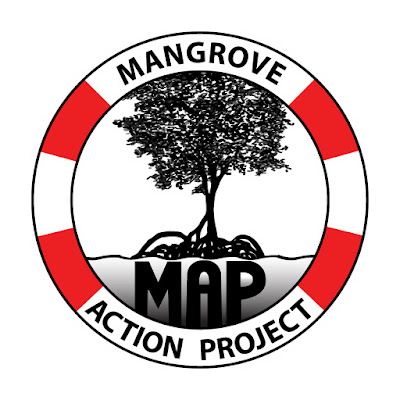 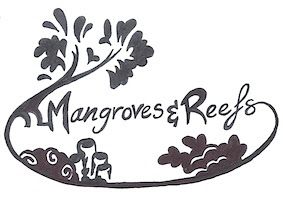 The new Myths & Legends book from Marvellous Mangroves. Only $20

Posted by BlogAdmin at 8:35 PM No comments: