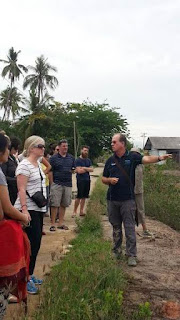 Between May 26-29, 2015, the Mangrove Action Project (MAP)-Asia hosted 17 students from the Geography Department at York University, Toronto, Canada. The field course abroad which took place in Chiang Mai and Krabi provinces was led by Professor  Peter Vandergeest, who happens to be one of MAP’s advisors,  and Dr. Tubtim Tubtim, who was the local course coordinator. The objective of the visit was to learn from communities on Klang Island, Krabi, Thailand about community-based environmental conservation and development.  Jim Enright, MAP-Asia coordinator presented of the Ecosystems Protecting Infrastructure and Communities (EPIC) project which MAP has been implementing the Community-based Ecological Mangrove Restoration (CBEMR) concept under this project.  EPIC investigates the role that healthy ecosystems play in reducing disaster risk and supporting community-based adaptation to climate change.  The goal is to find and promote nature-based solutions rather than solely relying on hard infrastructure which is not only expensive but provides no goods unlike mangroves. The students were also taken to visit one of the CBEMR demonstration sites at Ban Klong Kham, Krang Island, Krabi so they see the demonstration site first-hand.

Students were taken on a boat tour of the mangroves while a local community mangrove conservation expert, Bang Non, explained the mangrove history stating at the end of the charcoal concession period the local mangrove landscape appeared red rather than green like today, as so much vegetation had been removed the red soils were exposed.  He also the mangrove importance for local livelihoods in Krabi River Estuary, which is now a RAMSAR site.

One of the course exercises involved the students researching topics in small groups by going out and finding local resource people to interview through a translator.  The students split into 4 groups and interviewed a local government authorities and community members from 3 villages on the island. The different topics they selected to study were 1). mangrove and shrimp aquaculture; impact on natural resources and livelihoods, 2) tourism development; benefits and impacts to local communities, 3) erosion; the causes and projects/activities dealing with problems and 4) natural disaster preparedness.

The field course was a great opportunity for MAP to disseminate the CBEMR methodology to students from different region who most experienced mangroves for the first time!

Posted by BlogAdmin at 10:02 AM No comments:

On June 9th and 10th, 2015 Jaruwan Enright (Ning) joined the IUCN-Thailand organized meeting in Bangkok as a partner of the Ecosystems Protecting Infrastructure and Communities (EPIC) project in preparation for the IUCN-Department of Marine and Coastal Resources (DMCR) meeting on June 11th also in Bangkok.  Other IUCN-Thailand partner NGOs who were also implementing projects on the ground gathered to discuss and debate issues concerning Thailand’s new Coastal Resources Management Act, which will come into force at the end of 2015.
The new Act presents new opportunities for community engagement but there are concerns that if not properly implemented there could be significant negative impacts.

Under the new law, DMCR can designate Mangrove Conservation Areas and Marine and Coastal Resources as protected areas in order to save important coastal and marine resources. The new law encourages the participation of communities and local governments in conservation by forming multi-stakeholder platforms that can propose management plans for the marine and coastal resources.
Trat Province in the Eastern Gulf of Thailand will serve as one of the demonstration sites for the implementation of the new law. IUCN will work with DMCR on conducting field research, capacity building and multi-stakeholder dialogues to set up marine and coastal resource protected areas and management plans.

Posted by BlogAdmin at 9:54 AM No comments:

VerticalResponse f
Posted by BlogAdmin at 9:52 PM No comments:

On Friday the 5th of June was World Environment Day, and to celebrate MAP, with the help of our sponsors Global Nature Fund (GNF), Earth Synchronicity and Germany’s Federal Ministry of Economic Cooperation (BMZ), participated in a large half-day environmental event for grade 7-9 students in Krabi town along with other groups such as RAKS Thai and government agencies. The event was hosted by the Krabi Provincial Administrative Organization and was attended by over 2000 students. Presented in MAP’s booth were large banners depicting mangrove species, benefits of mangroves, food webs and knowledge pertaining to restoration and conservation. To raise awareness amongst the students on what MAP does for the community and environment staff conducted fun and educational, question and answer games complete with prizes.

Through fun and interactive educational games khun Bobby managed to reach a large audience of students who were excited to learn about mangrove conservation and restoration.

With the help of MAP staff member, khun Chay, students were able to find the answers to questions by using the banners, their own personal experiences and analytical skills.

Students proudly display some of the logos of MAP donors

Educational events such as these provide an excellent opportunity for students to get out of the class room and experience environmental conservation firsthand from organizations on the front lines. Through our fun and interactive game MAP was able to inspire students to participate and learn. MAPs dedicated staff are sure to have left a lasting impression on the students participating that day. The first step to action is education, and reaching impressionable minds at a young age is paramount in constructing a relationship between future influential community members and environmental conservation.

By MAP Intern Robbie Carrasco
Posted by BlogAdmin at 10:07 PM No comments:

VerticalResponse
Posted by BlogAdmin at 9:57 PM No comments: