Posted by BlogAdmin at 9:33 PM No comments:

Posted by BlogAdmin at 9:31 AM No comments:

Volunteers needed in Environmental Protection and Development. Please read below, and pass this on to anyone you think may be interested.

Description: The GEPADG is a non profit NGO based in Gunjur in Gambia who have many years of experience in working with international volunteers. They work to achieve long-term, sustainable solutions to poverty in The Gambia through reversing the current destruction of forests, mangroves and coastal ecosystems.

They are always working on different projects and volunteers can choose which area they are most interested in. Areas include: turtle monitoring; tree planting exercises; mangrove regeneration; environmental health and sanitation; village general cleansing; beach sweeping; workshops/conferences; beekeeping; vegetable gardening; community forestry scheme; bird watching and bush walk/patrolling, Eco tourism activities and tourist guided tours within the nature reserve this normally happens between October and November each year and tree planting exercises is between June and August . Turtle monitoring is between June and November each year .


Organisation: The Gunjur Environmental Protection and Development Group
(GEPAG)/CHEC-Gambia
Address: PO Box 21, Banjul, The Gambia West Africa
Project Location:Gunjur Kombo South District,West Coast Region, The Gambia,West Africa
Contact: Mr Badara N Bajo
Email: gepadg@yahoo.com
Website: www.genvironment.co.uk
Phone: +220 8800986 or mobile +220 9955063
Fax: +220 4486026
Languages: English
Who can volunteer? Adults of both sexes 17+
Commitment: 1 week minimum
Starting from August,2013
Cost: There are 3 different types of accommodation on offer. They are all in
a Gambian house only some are more westernized than others (i.e. modern
toilets, electricity) and some without electricity.Stay with local families.The cost is from £50 to £150 per month including
food,or $100 dollar a week and 100 Euro per week depending on the accommodation type

The Consumers Association of Penang (CAP) and Sahabat Alam Malaysia (SAM) urge the state government of Penang to cancel the proposed implementation of an aquaculture project in Penaga, Seberang Perai Utara (SPU) because of its potential impacts to the environment and local livelihoods.  The aquaculture project would destroy mangrove forests, pollute the sea, threaten fisheries resources and livelihood of coastal fishers, besides exposing the people and paddy fields here to the threat of storms, effects of tsunami and saltwater intrusion.
The shrimp farming project to be undertaken by the Aquaculture Operators Association of Penang (Persatuan Pengusaha Akuakultur Pulau Pinang - PENKUA) would cover an area of 204 hectares including mangrove forest from Kuala Bekah River in the south to Kuala Muda River in the north. We understand that the proposed project’s Environmental Impact Assessment (EIA) is yet to be approved. We believe that if this project is given the go ahead, there would be detrimental effects on the environment and the lives of people in the area.
Our survey found that many people in the surrounding area do not know about this proposed project. Many among them especially the fishing community are concerned about the problems that would occur if the project is implemented. It is estimated that the livelihood of about 1,000 coastal fishermen in the surrounding area would be affected if the mangrove trees are felled and the sea on which they depend for their livelihood is threatened by pollution from shrimp pond effluent. Fish, shrimp, crabs, clams and molluscs that are a source of income for the fishers will disappear if the mangrove forests are destroyed for the development of aquaculture ponds.
At the same time thousands of villagers living near the coast would be exposed to the threat of storms, tsunamis and coastal erosion in the future. And hundreds of hectares of paddy fields and agricultural land could be affected by salt water (sea water) intrusion when the mangrove forest which reduces wave energy and functions as windbreaker is destroyed.
The implementation of large-scale aquaculture projects in the state is not a solution to the present shortage of seafood supply. Rather, the short supply of seafood stems from the environmental damage and destruction of mangroves, as occurred in Balik Pulau and Seberang Perai Selatan (SPS), Nearly 2,000 fishermen in these two areas have suffered 50% decline of catches over the past few years due to development and shrimp farming in their area.

S.M.MOHAMED IDRIS
President
Consumers Association of Penang (CAP) and Sahabat Alam Malaysia (SAM)
Posted by BlogAdmin at 11:04 AM No comments: 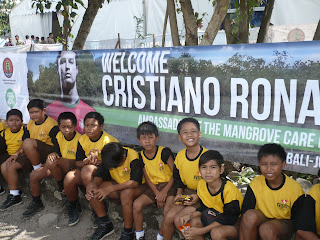 Christiano Ronaldo, world famous footballer of Portugal and Real Madrid, was invited as an ambassador of mangroves June 26th, to participate in a mangrove planting event alongside Indonesia's President Susilo Bambang Yudhyono (SBY), and the Indonesian Minister of Forests.
The Indonesian Mangrove Management Agency (BPHM) was in charge of the technical aspects of the planting.  The head of BPHM, Ir. Murdoko, called Ben Brown of Mangrove Action Project - Indonesia to visit the planting site several days before the event for technical recommendations.  The planting site at Tanjung Benoa, had been planted on 4 previous occasions, but had experienced total mortality in all those occasions. 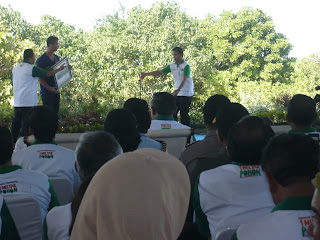 BPHM's response this time, was to plant mangroves protected by cylinders made of woven bamboo mats, ostensibly to keep snails (considered pests) off the trees and to keep the leaves above the highest tide, to avoid leaves getting muddy.  MAP-Indonesia explained that a healthy mangrove plant, of an appropriate species, planted in the appropriate place, will not succumb to pests (snails, etc.) or a bit of mud on the leaves.  The key is planting at an appropriate substrate elevation, somewhere between Mean Sea Level and High Tide.

BPHM had prepared 4 species of seedlings for planting, Sonneratia alba, Avicennia marina, Rhizophora apiculata and Brugueria gymnorhizza.  All four of these species are naturally present at this location.  This location already has a healthy growth of mangroves, and was more or less considered for ceremonial planting due to ease of access.  It was clear, at the site, that planting too far out to sea would again kill the mangroves.  But nature provided a cue as to how far out to sea young mangroves would survive.  A lone Sonneratia alba sapling was growing beyond the edge of the natural forest, on a substrate which had experienced sedimentation due to the construction of a sandy beach and hotel next door. 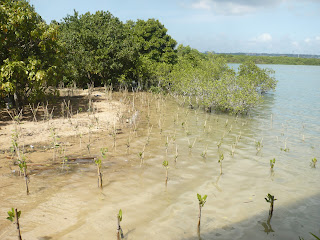 This sapling was situated 1.2 m above Lowest Atmospheric Tide (0 meters), and thus MAP-Indonesia reccommended that no plantings should take place below 1.2 meters.  BPHM followed this advice by and large, having students plant the area the day before the Ronaldo/SBY event, with 3000 mangroves of mixed species, all of which were planted at 1.2 m or higher.  Perhaps the trees didn't need to be planted at 1 meter spacings, and infilling of the naturally occuring forest wasn't necessary, but the event raised an amazing amount of general awareness about mangroves.

President SBY and Ronaldo himself planted their mangroves inside of screened bamboo cylinders, adjacent to a dock for ease of access, with artificially heightened sediment inside, because the ceremony took place at a 2.4 meter tide.  These larger saplings which were planted ceremonially will be relocated to an appropriate substrate height.

So - congratulations Indonesia for raising awareness about mangroves.  And congratulations again, for following up the planting today with support of a major Ecological Mangrove Restoration effort in the Province of Gorontalo, which should see at least 2600 of mangroves restored in aquaculture ponds illegally constructed in the Tanjung Panjang Nature Reserve two decades ago.
Posted by BlogAdmin at 9:32 AM No comments:

Posted by BlogAdmin at 9:34 AM No comments: