To Plant or Not to Plant 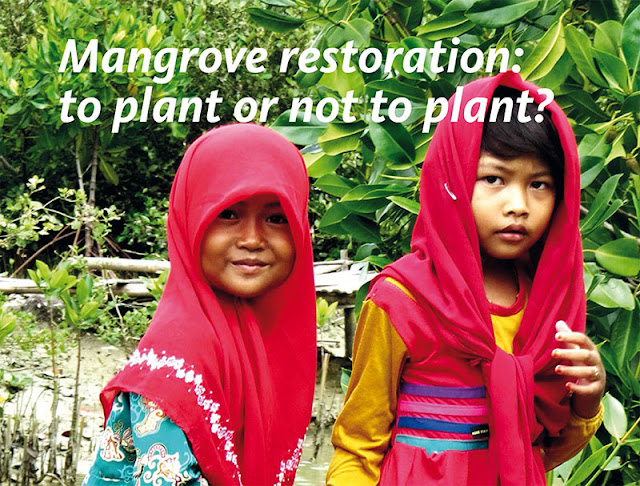 Experts draw attention to a successful method of mangrove regeneration on International Mangrove Day, 26th July 2017
Today, on the International Day for the Conservation of the Mangrove Ecosystem, conservation organisations and mangrove specialists worldwide highlight the multifunctional benefits of the practice of ‘natural regeneration’ of mangroves.  Compared to planting efforts, survival rates are considerably higher and it results in a more biodiverse, resilient and productive mangrove forest, enhancing community livelihoods and reducing disaster risk.
During the last decade enormous interest has been raised in the role mangroves can play in reducing tropical storm, coastal erosion and flood risk for coastal communities. Across the world hundreds of thousands of hectares of mangroves have been actively planted. But the majority of planting efforts fail as planted seedlings die and even if seedlings survive, the ecological value of a monoculture and benefits of the planting efforts for increased community resilience are questionable.

Wetlands International, Mangrove Action Project, Mangroves for the Future and the IUCN Mangrove Specialist Group (MSG) say that a more appropriate mangrove restoration is urgently needed worldwide to enhance coastal safety, fisheries, aquaculture and carbon sequestration. To support best practices, they pulled together lessons learnt in a discussion paper and raise attention for the ‘Ecological Mangrove Restoration approach’ (Lewis 2014). This approach focuses on creating the right biophysical and socio-economic conditions for mangroves to grow back naturally which results in the establishment of a sizeable, diverse, functional and self-sustaining mangrove forest that offers benefits both for nature and people.

The paper is available in English, Spanish, Khmer, Vietnamese, Burmese, Thai and Indonesian to assist parts of the world where mangroves have been lost or degraded, along with their valuable services. Later in the year also French, Filipino and Malaysian translations will be distributed.

While planting can assist or enrich the natural regeneration process, frequently wrong species are planted in the wrong places. Mono-species planting can lead to non-functional mangroves, with limited benefits and low resilience. Planting in the wrong places, such as in areas that were not previously covered by mangroves can lead to damage to other ecosystems or can block sediment and water flows.

The conservation organisations and mangrove experts encourages local NGOs and big funding agencies to be more cautious when implementing restoration projects and recommend involving restoration ecologists and experts in flood risk management. The importance of understanding the restoration site with a proper risk assessment and receiving advice on the best practices at the specific site, along with local experts, is key to effective mangrove rehabilitation.

They also recommend, to avoid mangrove reconversion, that economic activities are developed that provide sustainable benefits from the restored goods and services, thereby strengthening the business case for restoration. This means that local communities need to be empowered and authorities need to be involved from the onset of restoration plans.

Download the paper ‘Mangrove Restoration: to plant or not to plant’, available in 7 languages.
https://www.wetlands.org/publications/mangrove-restoration-to-plant-or-not-to-plant/

Posted by BlogAdmin at 10:59 PM No comments:


Mangrove Action Project is proud to celebrate 25 years of working to expand the awareness of mangrove forests and the people who depend upon them. Twenty-five years ago, raising the public awareness on mangroves and roles they play in fisheries, human safety, carbon-storage, coral reel protection, migratory bird habitat, and myriads of other benefits and value, seemed nearly insurmountable. Forests were being decimated, and destructive forces seemed unwilling to listen to the small voices of communities and NGO who cried out against it.

However, here we are in 2017, celebrating Mangrove Action Day which has been recognized by the United Nations and endorsed by countless communities and organizations, both public and private around the globe. We here at MAP are pleased to join in for the Mangrove Action Day July 26, 2017 activities. It is now apparent that the entire world has joined us in recognizing the role these vital forest ecosystems play in human life as well as the planet's life. However, there is still much to be done. Coal fired power plants, dams, overfishing, coastal development and yes, still, unsustainable shrimp farming continue to destroy countless hectares of forest annually.

As you remember Mangrove Action Day today, we encourage you to use your small voice to continue to work towards a healthier future; for the planet and for our children.

EDUCATIONAL WORKSHOP On 11th July, an environmental education activity was held at Ban Bang Kang Khao School in Trang, Thailand where the students learned all about the mangrove ecosystem from MAP facilitator, Udom Pariwatpan (Em), and then all 20 students went to visit the nearby community Community-based Ecological Mangrove Restoration (CBEMR) site to identify mangrove plant and animal species.   Students also learned how to do transect monitoring, putting their species ID skills to the test.  The school principal, Ms.Wimala Thongnoo, has been a keen supporter of MAP’s EE activities at the school over the past 5 years under the Global Nature Fund, Dailmer AG and the Body Shop Foundation donors. 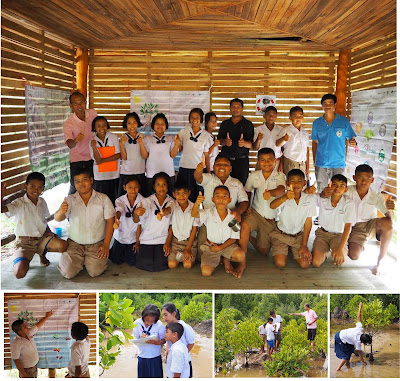 ART CONTEST MAP staff, Jim, Ning and Em organized a mangrove art contest on 26th July at Tasanook School in Phang Nga province.  It’s expected that 30 children will join in the event which will be followed by a trip to the MAP supported mangrove interpretative natural trail completed in 2016 under the Dailmer AG  project.  The winning art pieces will sent to MAP’s headquarters is the USA to be entered onto the annual mangrove art contest with the final 12 winning art pieces, obtaining a month in the 2018 MAP Mangrove Art Calendar. 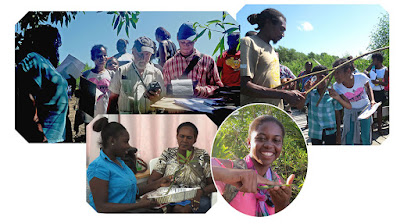 Led by MAP’s education director, Martin Keeley, and CORE’s director Loes Trustfull, participants spent of their time learning how to deliver simple and practical hands-on activities to their students and communities which give students a basic understanding of the science behind mangrove ecology. The activities were selected from MAP’s Marvellous Mangroves of Suriname, a 350-page teachers curriculum-based resource guide developed initially by Mr. Keeley for the Cayman Islands, which has been adapted and translated for use in thirteen countries worldwide. “Each of the hands-on activities uses simple items found in every household which cost little – if any – money. This makes it easier for teachers to use the materials when demonstrating to students basic scientific and ecological principles,” explains Mr. Keeley. “The theory behind the activities is explained in easy-to-teach terms, and the curriculum contains many illustrations that reinforce both theory and hands-on activities.” 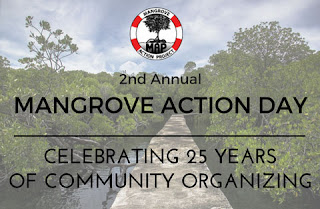 MAP'S Seattle office hosted a Mangrove Action Day event in Seattle at the Arboretum with both Sara Lavenhar and Alfredo Quarto presenting. The event was open to the public. Please see the event flyer and the link to the event page:

For the third year in a row, we are also holding our mangrove.is photo contest, raising awareness of the connections people have with mangrove forests by creating a global photography exhibition. photos were part of a special exhibition that will help spread the importance of mangroves. At the event in Seattle, viewers had the chance to view incredible photos from years prior, and vote for their favorites to determine the winner!

We invite all primary school children from tropical and sub-tropical nations, and whose schools are located near mangroves, to create art telling us “why mangroves are important to my community and me?”Selected winners will be published in the 2018 calendar to be distributed internationally to raise awareness of mangrove forest ecology. This colorful calendar has increased in popularity since its first publication in 2002. The 2018 calendar is our 16th edition. We would like to invite children from your country to join in this fantastic creative and educational competition. It is an opportunity for the younger generation to learn about the vital role Mangroves play in the lives of coastal communities and marine life around the world whilst letting them explore their imagination and have fun when creating their pieces of art. This contest aims to promote appreciation and awareness of mangrove forests and communities, while encouraging and listening to creative voices of children living in mangrove regions.
Posted by BlogAdmin at 9:55 PM No comments:

Mangrove Action Project
Posted by BlogAdmin at 10:09 PM No comments:

Mangrove to Seagrass, a journey into Thailand’s coastal ecosystems

During a two month immersion into the mangrove world as a volunteer with the Mangrove Action Project in Trang, southern Thailand I learned there are more than 60 species, they livelihoods for local communities, play a role in coastal protection, and have been greatly reduced in Thailand, mainly due to shrimp farming … It is indeed a unique ecosystem which has had so much research  on a whole range of different kinds of issues and many books have been written about this magnificent forest.  Some people have even devoted their entire life to protecting it.
Personally, I needed time to step back and explore something else.
Dr. Barry Bendell monitors seagrass on Koh Phra Thong an island off the coast of Phang-nga Province, Thailand. He is one of MAP’s volunteer scientific advisors, which is how I got in touch with him.
So, on Wednesday 22nd of June with the big Spring tides approaching — it was time to monitor seagrass — So I hit the road to meet him.
It was a long journey from the south to the north along the Andaman sea’s coast, taking me from Trang, through Krabi, past Phuket island to Phang-nga province, which by the way has the largest mangrove area in all Thailand.
Around Trang, it’s mainly flat and rolling land with oil palms and rubber tree plantations where a few limestone walls pop-up in the scenery, especially along the coast. Then, on the way, more and more cliffs unveiled themselves from Krabi to Phang-nga, a small mountain range of karst limestone emerges.  Passing Phang-nga town, it becames more hilly and the winding road is surrounded by tropical rainforest all the way to my final destination for today: Kuraburi located on the main coastal road with a few houses and shops lining both sides.
Buses as well show a contrast between north and south on the Andaman coast. A comfy large seat in a fast AC bus from Trang to Phang-nga and then an old, orange painted, Mercedes-Benz bus, with benches as seats, open windows and fan on the ceiling, cruising at 30km per hour on average, struggling to get at the top  of the hills.
I arrived just before nightfall to meet Barry We had a good dinner near the bus station, a cold beer and then we went to bed early. Early morning was announced to catch a boat to the Island.
In the morning, after a rice porridge and some purchases at the market, we went to the Kurburi pier. No boat was leaving to the island so we travelled to a second pier. Waiting for our boat, we were watching three local boats being filled up  with sacks of concrete. The loaded boat’s gunnels were riding just above sea level and a small wave and some rains would be enough to sink them. Kind of laughing about the danger these people take, we were astonished when we understand that these were the only boats available to reach the island today.


Posted by Map Asia Volunteer at 1:40 AM No comments:

Mangrove Action Project
Posted by BlogAdmin at 10:47 PM No comments: