Nai Nang’s honey will “BEE” in the best hotels of Thailand!

Four years ago the community of Nai Nang in Krabi province, Thailand, started producing honey partly made from the mangroves flowers surrounding the village, but the most challenging part was how to market it. Most of the income and jobs around Nai Nang village are based on palm oil, rubber and fishing. The people asked themselves, “How can we make an income besides farming and fishing?” That’s when the idea of honey bees came along as several community members had already set-out bee boxes which had been colonized by the wild bee, Apis cerana. This is not only good for the environment, but also a great source of income and excellent for mangrove pollination.
Mangroves are vital to this project, and MAP has provided technical support helping out with mangrove planting, drainage of the area allowing natural mangrove reproduction.  But most importantly, teaching and educating the community so they can take care of the mangrove and continue with the restoration and conservation of this ecosystem. The mangrove is as vital to community as the community to the mangrove.

Part of MAP’s help has been providing packaging and marketing support, and things are looking good for Nai Nang! The effort of the people and MAP is showing good results, as a couple of weeks ago Nai Nang received a visit from Mr. Sean Panton, Director of Corporate Social Responsibility at Marriott Hotels Thailand. He is responsible for the development of internal and external community and environmental programs and initiatives. Sean brought two chefs from Marriott Hotels in Phuket to taste test the honey. They liked it very much for the original salty-sweet taste of it, and their business interest with the community looks promising as they hope to make an agreement to purchase all natural raw Nai Nang honey to supply their hotels here in Thailand, the honey will be in the welcome drinks in Marriott Phuket and during the breakfast buffet in all the other Marriott branches. 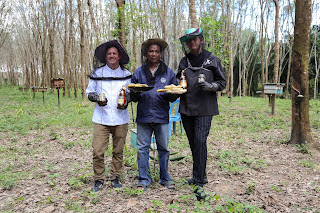 This is great news for MAP and the Nai Nang community! A friendly relationship between the hotel business and conservation is possible, and what better example than this!
Posted by Map Asia Volunteer at 11:25 PM No comments:

Posted by BlogAdmin at 7:32 PM No comments:

VerticalResponse
Posted by BlogAdmin at 9:26 PM No comments: