The Criminalization of Fisherfolks, Environmental Activist and Student Journalist in Makassar

KIARA Criticize the Arrestation of Fisherfolks, Environment Activist,  and Students in Makassar 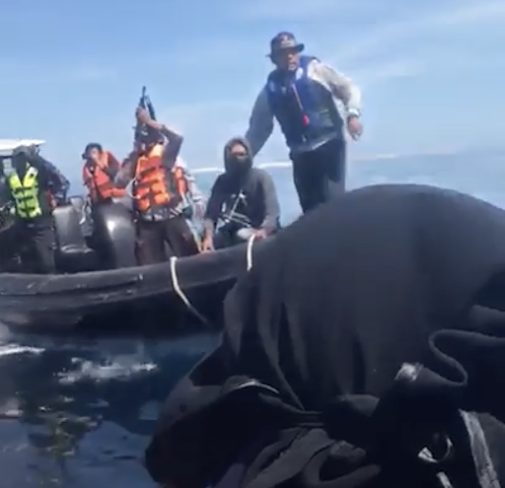 Jakarta, 12 September 2020 – KIARA with Save Indonesian Seas Coalition,  Alliance to Save South Sulawesi Coastal Area (ASP Sulawesi Selatan) and other civil  society organizations in South Sulawesi have condemned the arbitrary arrestation of 7  (seven) fisherfolks, 1 (one) environment activist, and 3 (three) students – who work as  press journalist in Makassar, by Polairud (Air and Water Police Force) of South  Sulawesi.

The arbitrary arrestation was conducted to detain several fisherfolks, namely Nawir,  Asrul, Andi Saputra, Irwan, Mustakim, Nasar, and Rijal. One of the fisherfolks even  experienced physical violence to the point that his face was bleeding. In addition, the environment activist – Rahmat – who was recording the incident, was also being  arrested and experienced some physical violence. He was hit in the face, being kicked,  stomped in the neck. Even Rahmat’s handphone which being used to record, fell into  the sea when the Polairud tried to confiscate it.

Meanwhile, the other three students whom also being student press journalists, were  actually doing news covering on the mass action. The three students are Hendra from  Unit Kegiatan Pers Mahasiswa Universitas Hasanuddin (UKPM-UH), Mansur and  Raihan from Unit Kegiatan Penerbitan dan Penulisan Mahasiswa Universitas Muslim  Indonesia (UPPM-UMI). Before being forcibly arrested, the three students had  showed their student pers id card. However, the Polairud ignored it and were still  arresting the students.

The arrestation incident happened after the mass demonstration which conducted by  the community, environment activists, and students who against the sand mining  project of Boskalis’s ship in Spermonde seas, particularly in the area near  Kondingareng Lompo Island.

Nevertheless, the mass demonstration was actually the respond for the accumulation  of sand mining activities in the purpose of Makassar New Port (MNP) project  development which covering around 1428 ha through reclamation. Naturally, it gives  various negative impacts to the fisherfolks and make the fisherfolks in Kodingareng  Island fisghting back the development project endlessly.

Centre data and information of KIARA (2020) noted that if the sand mining activity  has been operated since 13 February until August 2020, then the mining activity has  been operating for 7 months already. During these 7 months – which calculated  around 200 days – the ship which owned by PT Boskalis, has mined around

21.300.000 m3 of sea sands from Spermonder seas, particularly the area near  Kondingareng Lompo island. The calculation of 21.300.000 m3 comes from the  transport capacity from PT Boskalis’ ship which have around 35.500 m3 capacity with  three-times shipment per day.

“The volume of the sea sand which around 12.300.000 m3, is not a small figure. It  could destroy the marine ecosystem which becomes the home of fish and other sea  biodiversity. It will also affect in the serious long-term destruction impact,” said  Ahmad Fakar, the Coordinator of Alliance to Save South Sulawesi Coastal Area.

RZWP3K has to be evaluated and canceled

Based on the perspective of Susan Herawati – Secretary General of KIARA – the  incident happened in Kodingareng island was actually the impacts from marine spatial  policy as stated in the South Sulawesi Provincial Regulation No. 2/2019 on Coastal  and Small Islands Zonation Plan (RZWP3K) of South Sulawesi 2019-2039. “In  accommodating the strategize national project, South Sulawesi’s RZWP3K has  allocating some reclamation area for MNP project and sand mining,” she said.

In addition, RZWP3K is actually a form of deprivation of livelihood and living space  for fisherfolks, fisherwomen, and other community who lived in coastal area and small  islands. In RZWP3K, various reclamation projects, sand mining, PLTU (Electric Steam  Power Plant), and other big-scale development projects. “Nevertheless, at the same  time, RZWP3K is not placing the rights of fisherfolks as the main priority on marine  spatial planning,” she added.

Centre Data and Information of KIARA (2019) noted that there are several problems  which can be find in RZWP3K, which are: first, it doesn’t prioritize coastal community  as the main actor in managing marine and coastal resources; second, the allocation  for coastal community’s livelihood is particularly smaller than the allocation space for  port, industry, reclamation, mining, tourism, conservation, and any other projects;  third, the preparation of the marine spatial regulations only provides legal certainty  for private’s benefit and interest; fourth, with lots of articles/clause which  accommodating reclamation projects, marine spatial regulations is also not  considering the sustainability of marine ecosystem; fifth, mixing up the traditional  fishing area for traditional fisherfolks with others public uses areas, as it will impacts  on the high-risk of fisherfolks being hit by larger ships.

“Because it only prioritizes the project, RZWP3K often triggers the conflict in various  places in Indonesia. The incident happened in Makassar is actually a clear evidence  that Provincial Regulation on RZWP3K is actually the reason of maritime space  conflict” said Susan.

Other important thing that lacked to be recognized in RZWP3K in South Sulawesi is  the Disaster problem. Based on the document published in 2017 about Earthquake  Map in Indonesia by the National Center for Earthquake Studies, Research Institute  for Housing and Human Settlements- Ministry of Public Works and Housing  Indonesia, together with other institutions and universities in Indonesia like LIPI,

AIPI, BMKG, BNPB UGM, UI, and ITB, it stated that in the Makassar Strait there is  earthquake fault. "In other words, the RZWP3K in South Sulawesi has established  without considering the natural disasters that exist in the Makassar Strait. Ironically,  the area for sea sand mining has been allocated 9,355.49 hectares, "added Susan.

Therefore, KIARA urges the government of Indonesia to evaluate all the Regional  Regulations of RZWP3K that have been established, especially the RZWP3K in South  Sulawesi. Because the policy has been proven to confiscate the rights of fishermen,  fisherwomen, and coastal and small island communities in Indonesia and unaware of  the risk of natural disasters.

"Reflecting on the case of sand mining in the Spermonde area that give effect to the  fishermen on Kodingareng Island, it proves that the RZWP3K in South Sulawesi  consists of many problems. We urge the RZWP3K in Indonesia to be evaluated and  revoked, "Susan concluded.