I am very much thankful to you for your kind concern to take up the issue of protection of Mangroves in
Kakinada city of Andhra Pradesh state in India as part of your global mission of Mangrove Action Project.

Mangroves in Eastern India: In the east coast of India 5 major locations of mangroves forests which are
Sundarbans, Mahanadi, Godavari, Krishna & Cauvery (as shown in the fig below) are existing and are being
protected by the Government of India. 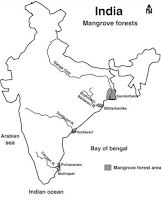 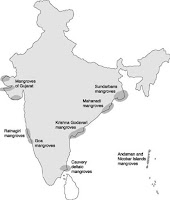 Mangroves in Andhra Pradesh: Nature blessed Andhra Pradesh with huge area of naturally formed
mangroves between the confluences of Godavari and Krishna rivers into the Bay of Bengal, of which an
area of 235.7 Sq.Km is totally protected by “Coringa Wildlife Sanctuary”. But the mangroves outside the
Coringa Wildlife Sanctuary are vulnerable as they are not declared as forests which are getting encroached
in the name of development. One such stretch is on the the northern portion of Coringa, where the
mangroves existing have become part of the port city called Kakinada.

Mangroves in Kakinada were safe as long as Kakinada remained as a fishermen's port with a fishing
harbour. The destruction of mangroves started ever since the Andhra Pradesh Government constructed a
sea port there in 1997. Fishermen, nor the public living in Kakinada are aware the importance of mangroves
to conserve the bio-diversity so the destructions have happened in the name of development till 2003
without any objections from public.

Government Protection: Mangroves in India are legally protected through various Acts like Indian Forest
Act, 1927, Environment Protection Act, 1986, Wildlife Protection Act 1972, National Bio-Diversity Act 2002
etc. Further, Government of India has introduced The National Bio-diversity Act 2003, with a main objective
is to “preserve the existing bio-diversity and to improve it”, thus a new era of protection of mangroves has
begun.

Legal Protection: The Mangroves are also further protected by Coastal Regulation Zone Notification
2011 & 2019 classified them as Ecologically Sensitive Areas and put a restriction of No Construction
allowed within 50 metres from the area of Mangroves. Further, the judgements of Supreme Court in case
of T. N. Godavarman on 12.12.1996, where the Supreme Court clearly stated that mangroves anywhere
falls under deemed forest category, thus no destruction of mangroves is permissible without a due Forest
Clearance under Forest Conservation Act. 1980.

Threat to 100 acres of Mangroves: In spite of all these Laws are in Force to protect these Mangroves,
Government of Andhra Pradesh has decided to destroy a stretch of mangroves in 100 acres and fill this
area to build houses for poor. The work has began in March 2020 so far they have destroyed an area of 60
acres approximately.

Objections raised by Fishermen to protect their livelihood: Initially, local fishermen resisted and
protested from January 2020 till March 21 2020. On March 22nd the Lock Down was announced by the
Government of India. Fishermen followed the lockdown norms but the government officials continued the
destruction even during the lockdown. Finally, the fishermen broke the Corona lockdown, came out in large
numbers to protect the Mangroves which they believe their livelihood depended on: https://youtu.be/
amGgUAIos6w. Fishermen also filed a case in High Court of the State of Andhra Pradesh on 22nd May
2020 and the High Court is considering the case actively and imposed a status quo on this and the case
will be heard again after the court vacations in June 2020.

Action Initiated by Civil Society: Eminent personalities, environment consciousness people wrote letters
about the destruction of Mangroves to the State and Central Government but all are in vain, nothing really
could stop the destruction of Mangroves, instead the pace has been increased https://youtu.be/
Y4Obp44h1us, further a project adjacent to this area started releasing its untreated affluents https://
youtu.be/cIUIL8RL23M but no action initiated either by the authorities. Thus finally as environment
conservationist, I am forced to filed a petition with the National Green Tribunal (NGT) on 17th April 2020
and on 30th April 2020 adjudicated matter and appointed a 5 member committee to examine the
destruction of Mangroves with the help of satellite maps and we are sure justice will be done on 18th
August 2020 when the next adjournment is posted.

World over the human greed is taken over their consciousness towards the protection of environment, India
is not an exception to it. In a way Covid-19 tried has tried to put us in the right perspective. It's time for all
environment consciousness people join together to protect natural resources on our planet. I request the
global Mangrove Protection fraternity to help us in protecting the Mangroves in India as part of your MAP.