Ecological Indiana Jones and the Raiders of the Lost Carbon 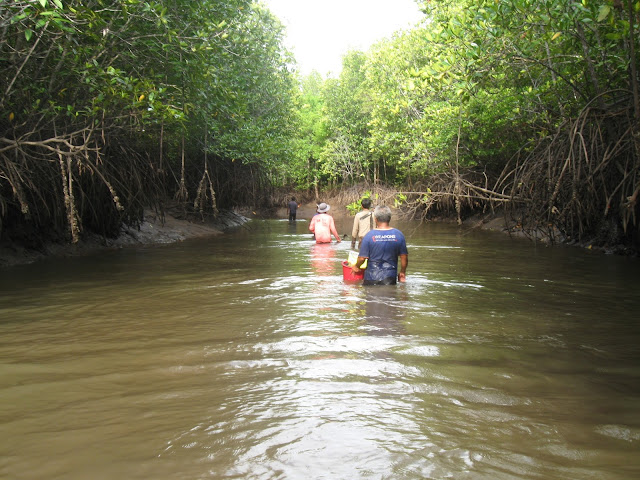 The mosquitos buzzed and the sun pierced the canopy as we slowly made our way through the dense tangled webs of mangrove roots and knee-deep mud. Moving through a mangrove forest is a humbling experience where you can feel trapped and claustrophobic, but at the same time feeling awed by the sheer density and volume of the above-ground root systems. The first thing that came to my mind while trekking through these forests to our sampling site was that of being an ecological Indiana Jones, but instead of uncovering ancient human artifacts we were digging into mother nature’s history books by measuring the carbon stored deep in these beautiful yet intimidating wetlands.

Mangroves are known to be one of the most dense carbon storage systems on earth “containing on average 1,023Mg carbon per hectare” with the soils accounting for “49-98% of carbon storage in these systems” making them at least twice as effective carbon stores when compared to other tropical forests. This high degree of carbon storage is due primarily to the tendency of water-logged soil to become anaerobic or devoid of oxygen quicker and at a higher level than most other soils. This lack of oxygen hinders microbial decomposition, thus allowing carbon rich soil to be stored for an almost indefinite amount of time especially if undisturbed. With humans releasing unprecedented amounts of greenhouse gases into the atmosphere and deforestation being the second leading cause of anthropocentric CO2 emissions, it is clear that we must take the necessary steps to protect these natural carbon sequestration systems from land use change.

Programs such as the United Nations REDD+ programme (un-redd.org) and Mangroves for the Future’s “Income for Coastal Communities for Mangrove Protection (mangrovesforthefuture.org) support projects that measure carbon values of mangrove forests and help gather data on how to help protect and save mangroves from land use changes. By collecting samples and data from within these forests we can measure the amount of carbon stored in the mangroves and the underlying soils. This allows us to assign numerical values to the services that the forests provide through carbon sequestration. Such information gained from this research is a powerful tool to spur conservation and restoration, thus making it easier for us to make informed decisions regarding mangrove forests and their future land use. And with mangroves being lost at about 1% per year it makes it more important than ever to have a clear idea of exactly what goods and services these forests provide to society before we let them disappear.

Jacob Bukoski, a graduate student at the Yale School of Forestry and Environmental Studies, is currently writing his thesis in which he describes a predictive model of mangrove carbon stocks in Southeast Asia. MAP has had the privilege of helping support Jacob’s field work because we see it as very valuable for the community and for mangrove conservation and restoration. I had the pleasure of spending a week with Jacob and our Thai helpers on Koh Klang in the Krabi province assisting him with his field work. While Jacob uses CIFOR’s “Protocols for the measurement, monitoring and reporting of structure, biomass and carbon stocks in mangrove forests” as a manual for his research, my story-telling below is a rough outline of the guide in accordance to our field work research. 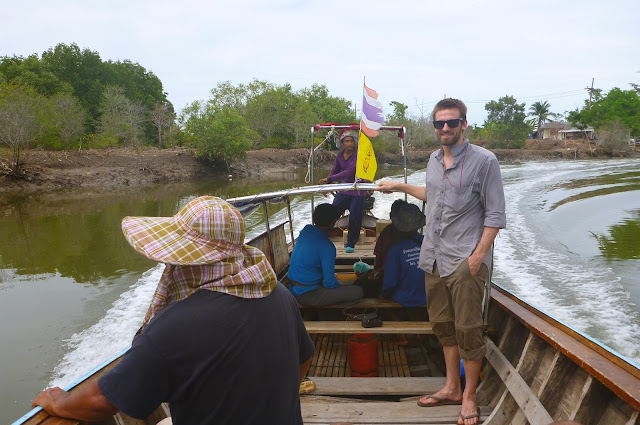 After selecting our sampling sites with the use of a random GPS location generator in the target mangrove forest, Jacob, the team and I set out by long tail boat to attempt to get as close as we could to each site by water. 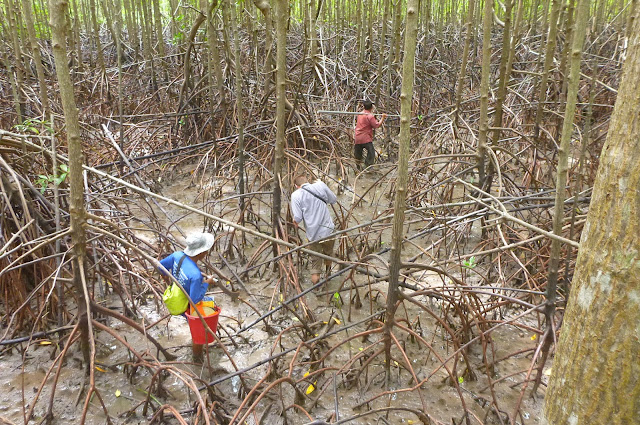 We had to then trek, crawl and swim our way to the location of the GPS coordinates of each sampling site. 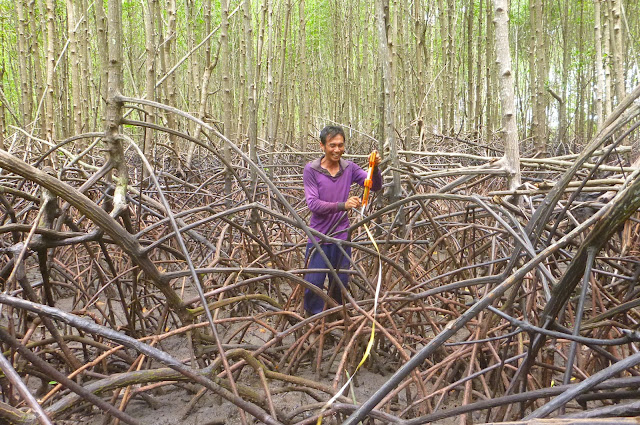 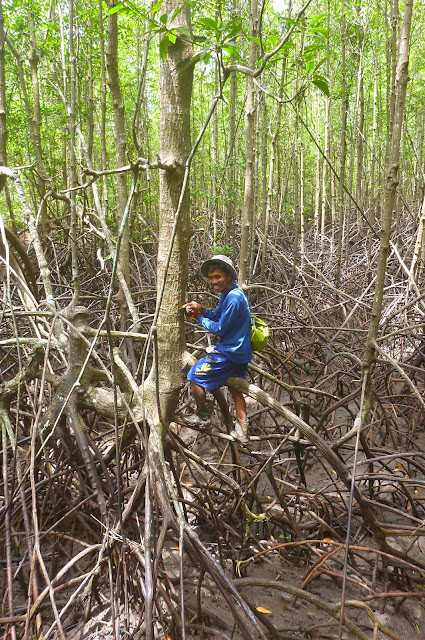 Next, Bang San measures the diameter of the trees within seven meters of the center of the subplot at either chest height or 30cm above the roots. 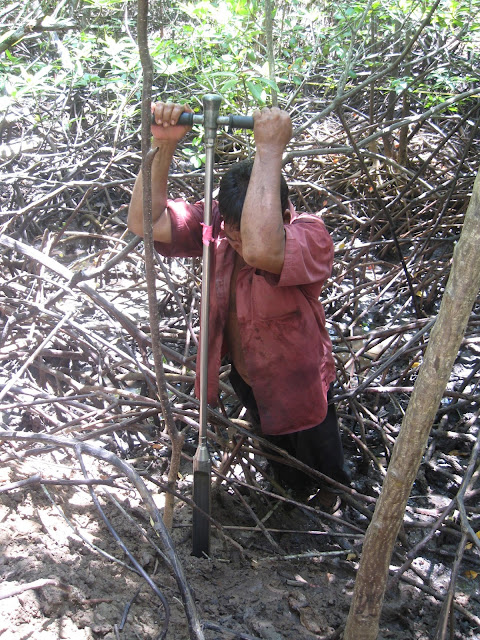 Bang Ream is seen here collecting a soil sample. Soil samples are collected from a depth of up to two meters using an auger and are packaged for shipment to Bangkok for carbon testing at a laboratory in Kasetsart University. 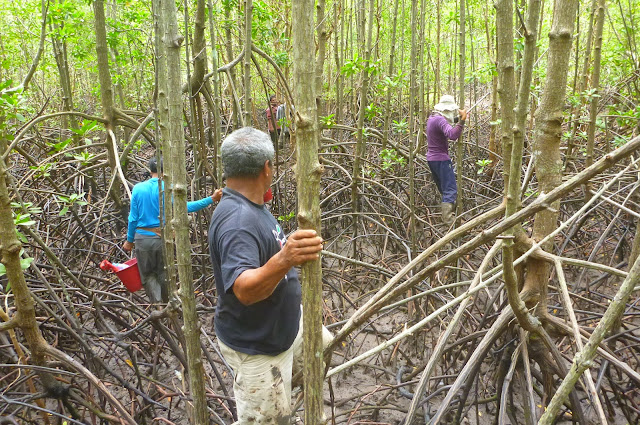 At the completion of collecting forest biomass information at the first subplot, we use the compass to direct us and measure 25 meters from that point to determine the next subplot; we will repeat the process for the next subplots until all five at that plot are completed. 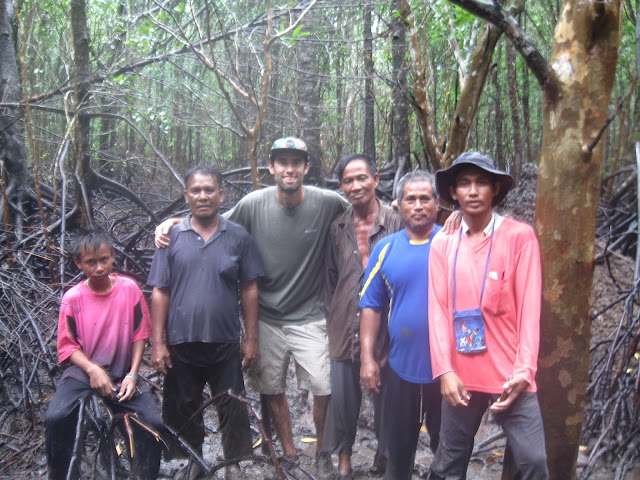 As you can see, there are many components to the collection of field data. Everything must be accomplished precisely in accordance to the pre-determined protocols to ensure valid and useful data. These data are subsequently entered into a larger equation that can be used to calculate the overall carbon content of the forest. Jacob can then use his work here to verify his model that predicts the overall carbon content of mangrove forests using a set of inputs like latitude, precipitation, tree size, etc.

The ultimate goal is to accurately predict the carbon content of a pinpoint area of mangrove forest by using simple and inexpensive data instead of relying on costly field work. Jacob’s work is a part of the larger “Income for coastal communities for protecting mangroves project” which “aims to develop a low cost mechanism enabling investors to responsibly promote mangrove conservation, carbon emissions reduction and sustainable development, through the provision of funding to local communities for livelihood diversification, resource enhancement and coastal protection.” (https://www.mangrovesforthefuture.org/grants/regional-grant-facilities/income-for-coastal-communities-for-mangrove-protection/).

Thanks to Jacob’s research MAP has been able to use this opportunity to obtain and analyze soil core samples from other sites on Koh Klang Island which are in the MAP Ecosystems Protecting Infrastructure and Communities (EPIC) program. These two sites, which are within several kilometers of where Jacob’s plots are located in the Krabi river estuary, will offer us a view into the soils degradation from shrimp farming practices, primarily its predicted loss of carbon content. This will allow us a close comparison between the secondary growth of the sampled plots in the Krabi River Estuary and the soil of abandoned shrimp farms located in former mangrove forests. With this information MAP will be able to determine the levels of carbon present in the abandoned shrimp farms which have been devoid of mangrove vegetation for about the past thirty years. This valuable information will help us better understand the value of our conservation and restoration work in terms of carbon sequestration. The soil cores will provide evidence as to whether shrimp farming releases large amounts of the carbon stored in these soils into the atmosphere. An update on this section will be released once the soils have been analyzed and we have received the appropriate data, but for now we expect that the EPIC site soil holds significantly less amount of carbon than the healthy mangrove forest soils at the plots in the Krabi river estuary. 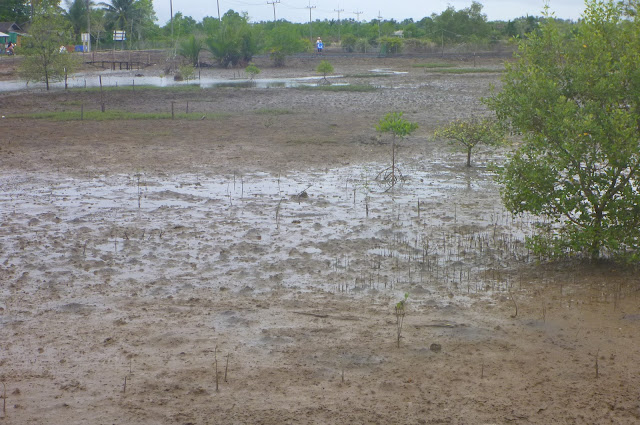 This is a picture taken of EPIC site 2, an abandoned shrimp pond, which has been devoid of mangroves the past 30 years and used to look like the mangrove forest pictures seen above.

Many times in the field we were met with an incredible diversity of physical and mental challenges, but we carried on just as Indiana Jones would carry on regardless of the hardships. Whether assaulted by mosquitoes, stuck in knee-deep mud, or swimming back to our boat because high tide came without us noticing, we could only laugh and joke about these predicaments, dismissing them with the saying “mai bpen rai” which translates to “no worries”. We found no hidden jewels or great treasure in our trek through the forest, but we knew that the overarching goals of this endeavor is actually of much greater value: a stabilized climate, sustainable enterprise and environmental justice.

And exploring these forests gave me a new appreciation for the things in life that at first glance may seem as useless, dull and expendable which I suppose those who bulldoze these magical forests must feel. But when we look more closely you come to realize the splendor in every aspect of these forests--and as you look even closer it all comes alive before your eyes. The crabs scuttle, the mud skippers bicker, the mangrove tree leaves rustle in the wind and you are reminded of the importance of this special place between land and sea for its intrinsic natural beauty, carbon sequestration and its support of sustainable livelihoods, coastal protection, habitat, erosion mitigation, and so much more.

robbie.carrasco@gmail.com
Posted by Map Asia Volunteer at 4:29 AM