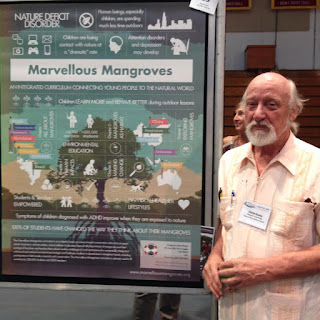 Ten years ago Richard Louv, in his book Last Child in the Woods, coined the phrase Nature Deficit Disorder to describe the disconnect of young people with their natural world. Now more than 50% of the world’s population lives in cities. Add to that the addiction of children to the screen – be it computer, cell phone or TV – and their detachment from the planet’s natural ecosystems becomes even more significant.

Last year a Chinese study of 100,000 families in six cities showed the full extent of Nature Deficit Disorder in that country. A country which boasts five megacities with a population over 10 million and 14 with more than 5 million. The study showed that – as in the US – Chinese children spent over 50 hours a week staring at a screen. Certainly not exploring the natural world.

Marvellous Mangroves is a curriculum-based, hands-on science program which – since it started in 2001 – has been introduced to thirteen countries worldwide. Based on an award winning wetlands education program developed in Western Canada and the Pacific Northwest, the program emphasizes in-depth mangrove ecosystem exploration by teachers and their students.

The 350 + page manual has to be translated and adapted for use in each country where it is introduced to interface with national and regional curriculum, plus incorporate local flora, fauna, geology and geography. It is introduced to local teachers through extended in-depth workshops, and in turn to their students in the classroom and field through Mangrove Clubs in each school.

It is not enough to teach the true value of mangrove ecosystems through a superficial means of communications. Posters, fliers, displays, websites and one-day stand-alone field trips are not enough if we are going to change the focus and understanding of teachers, students and their communities. In-depth programs like Marvellous Mangroves need to teach core values through traditional education systems to fight Nature Deficit Disorder.

Two MAP-Asia staffers, Ms. Jaruwan Enright and Mr. Udomsak Pariwatpan, joined a four day workshop on “AFOLU (1) Working Group Technical workshop: Advancing the mapping and monitoring of mangrove ecosystems” held in Ho Chi Minh City, Vietnam on 9-12 August 2016.  The workshop was organized by USAID through the following programs; SERVIR-Mekong (2), SilvaCarbon (3) and SWAMP (4) and Low Emissions Asian Development (LEAD). There were more than 60 participants represented from government, civil society agencies and researchers who are responsible and working on coastal management and remote sensing for mapping mangrove forest in Southeast Asia.

The workshop aimed was to bridge the gap between latest technological remote sensing advances and current decision-making for coastal zone management. Thus the current technical capacity needs and support required for improving the creation and use of mangrove data in the region was identified.  The workshop presented lots of opportunity for discussions and fieldwork practice on integrating ground data for biomass estimation.

The one day field work exercise was conducted at the Can Gio Bioshere Reserve is 75,740 hectares in size has been declared as a Biosphere Reserve by UNESCO in 2000.  Can Gio is located 40 km southeast of Ho Chi Minh City and the site is an important wildlife sanctuary in Vietnam as it is characterized by a wetland bio-system dominated by mangrove, with more than 200 species of fauna and 52 species of flora and a number of rare species.

The workshop was a great opportunity for MAP-Asia staff to share experiences in the region and to re-connect with mangrove network friends representing both NGOs and Government.

1.  AFOLU: Agriculture, Forest and Land Use, is part of LEDS Global Partnership


2,  The SERVIR-Global network of regional geospatial support hubs is an initiative of the U.S. National Aeronautics and Space Administration (NASA) and the United States Agency for International Development (USAID).
3.  SilvaCarbon is a US Interagency initiative to build capacity for measuring and monitoring tropical forest and terrestrial carbon.
4.  SWAMP is the Sustainable Wetlands Adaptation and Mitigation Program () is a collaborative effort by the Center for International Forestry Research (CIFOR), the USDA Forest Service (USFS) and Oregon State University with support from the US Agency for International Development (USAID)
Posted by BlogAdmin at 9:54 AM No comments:

Mangrove Action Newsletter
Posted by BlogAdmin at 10:21 PM No comments: